Binay’s son, Makati Mayor Jejomar Erwin “Junjun” Binay, remains holed up in his office at the city hall as he faces suspension anew over the allegedly anomalous construction of the Makati Science High School building.

As early as Monday noon, supporters of the younger Binay have flocked to the Makati City Hall to prevent the serving of suspension order against the Makati Mayor, which will be done by Department of Interior and Local Government officials.

Several personnel from the National Capital Region Police Office were then detailed in the area to barricade the building and prevent supporters from entering the City Hall premises. 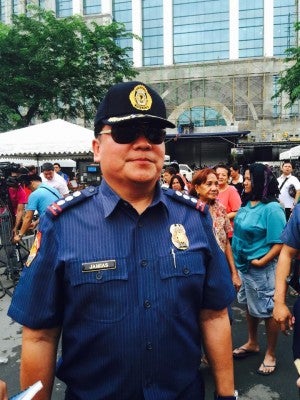 As he was eventually joined by Senator Nancy Binay, the Vice President had a heated argument with Jamias, who refused to remove the barricades, and reportedly pointed his finger at the policeman.

In a separate radio report, Jamias vowed to file charges against the Vice President.

Binay also accosted Chief Inspector Gideon Gines for allegedly pushing away Aida Dizon, the sister of his wife Dr. Elenita Binay, when she tried to get inside the City Hall.

Binay’s confrontation was to no avail as the police remained in place to barricade the City Hall. Additional troops were even sent early Tuesday.

The suspension order against Mayor Binay has already been posted at the entrance of the Makati City Hall early Tuesday. IDL