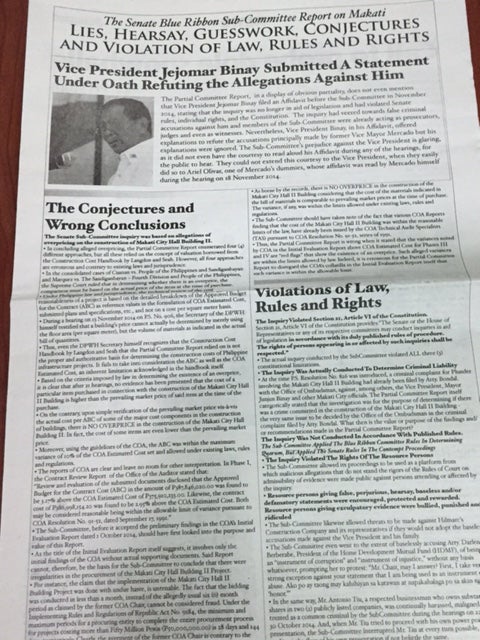 Photo of the one-page ad that appeared in a newspaper (not the Inquirer) on Monday, June 29, 2015.

Vice President Jejomar Binay has taken to writing letters and buying space in a newspaper to defend himself against the many accusations of corruption hurled against him.

One of the recipients of his eight-page letter dated June 5 was a bishop, who requested not to be identified.

In the letter that the bishop received last week, Binay belied all the issues thrown at him and his family—from the accusations made by former Makati City Vice Mayor Ernesto Mercado in the Senate and the report of the Anti-Money Laundering Council on his bank accounts.

As in his previous statements, Binay denied accusations such as owning an agricultural estate in Batangas province and a log cabin in Tagaytay City; receiving kickbacks for several projects in Makati City; earning millions as the president of the Boy Scouts of the Philippines; and owning a unit at a luxury condominium.

He said the allegations were designed to prevent him from derailing “the ruling party’s ambition to dominate the 2016 elections and continue [its] regime of incompetence, aimless leadership, large-scale corruption, selective justice and indifference to the poor.”

Binay said the corruption charges hurled against him formed a “pattern of lies and web of deceits” orchestrated by his political detractors, who saw him as their “obstacle” in the coming balloting.

“By now it is clear that they only intend to influence perception. This is not about justice or the fight against corruption,” Binay said in his letter.

“What is happening in the Senate is demolition by perception, exploiting the attitude of most people to believe outright negative statements, especially against a government official,” he added.

Binay said he was the target of his rivals due to his good performance in survey ratings. “As you are probably aware, my political detractors have resumed their malicious and baseless attacks against me in the media as part of their continuing efforts to bring down my survey ratings…”

In a one-page ad that appeared in a newspaper (not the Inquirer) on Monday and in a statement also issued Monday, Binay questioned the Senate blue ribbon subcommittee report prepared by Sen. Aquilino “Koko’’ Pimentel III.

In the ad, the Vice President said the subcommittee report amounted to “lies, hearsay, guesswork, conjectures and violation of law, rules and rights.” In the statement, Binay described the report as “faulty” and “uncorroborated.”

The Vice President said the subcommittee should have looked into the “truthfulness” of the statements of its resource persons, particularly Mercado who, according to Binay, said “nothing but lies and baseless accusations” at the long-running hearings.

Among the allegations that Mercado raised at the hearings but were found to be untrue, according to Binay, included the statement that he received a 13-percent kickback from infrastructure projects of Makati when he was its mayor. The Vice President said Mercado’s claim was based on what the late city engineer Nelson Morales had allegedly told the former vice mayor.

Binay also said Mercado’s allegation that his piggery in Batangas was air-conditioned was not true as shown in the ocular inspection by subcommittee members.

The ocular inspection also failed to see Mercado’s allegation that the property had luxurious mansions and a 40-car garage, the Vice President said.

“Mr. Mercado also claims that I own the property in Rosario, Batangas. However, the bare claim of Mercado was debunked by the testimony of businessman Antonio Tiu,” Binay said.

Binay also pointed out that Mercado’s allegation that he owned a log cabin in Tagaytay Highlands and received kickbacks from Hilmarc’s Construction Corp., contractor of the Makati City Hall Building II, was denied by their owners.

Binay said the subcommittee violated the Constitution when its hearings were not in aid of legislation “but to determine his criminal liability.”

Reacting to Binay’s ad against his subcommittee report, Pimentel said Binay should have just attended the Senate hearings.

“Instead of appearing before the subcommittee, he had to spend a lot of money,” Pimentel told reporters in a phone patch interview. “Let’s ask him why he has to spend.”

The senator said Binay might have decided to come out with an ad because he was feeling the effects of the findings of the subcommittee report.

Binay can face Senate instead of spending for ads–Pimentel