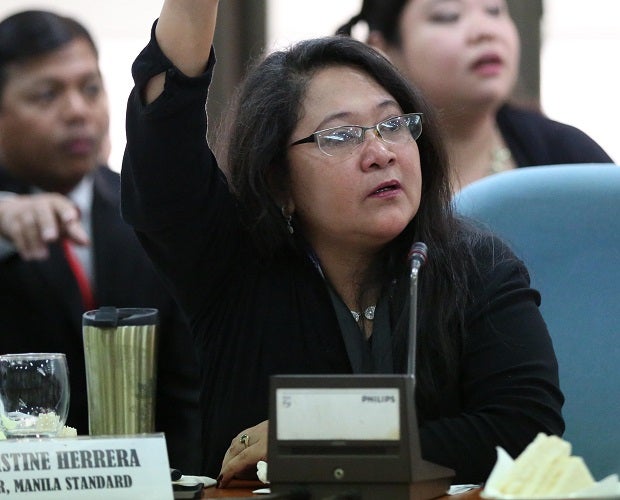 The reporter who broke the story on the alleged P440-million bribe for lawmakers to pass the proposed Bangsamoro Basic Law (BBL) Christine Herrera was in tears after she was almost cited with contempt before the House of Representatives on Tuesday.
INQUIRER / MARIANNE BERMUDEZ

A media group has slammed members of the House of Representatives for their “brazen act of bullying” a reporter to name her sources for a story which claims that a Chinese crime lord bribed lawmakers to favor the proposed Bangsamoro Basic Law (BBL).

“The threat by the House committee on good government and public accountability to cite The Standard reporter Christine Herrera in contempt unless she names members of the House of Representatives who allegedly received bribes … is a brazen act of bullying,” the National Union of Journalist of the Philippines (NUJP) said in a statement.

During an investigation of the House of Representatives on Tuesday on the alleged bribe from Chinese crime lord Wang Bo, Herrera insisted that her series of stories were from credible sources.

But a fuming Cavite Rep. Elpidio Barzaga said that Herrera should bare her sources, threatening that she would be cited in contempt if she refused to reveal her sources.

“Cavite Rep. Elpidio Barzaga’s move to cite Ms. Herrera in contempt reveals not only his ignorance or but also his propensity to violate the law that legislators like him created,” NUJP said.

Herrera invoked the Sotto Law during the hearing on why she could not be forced to reveal her sources.

According to the NUJP, Section 1 of Republic Act 53 or the Sotto Law states that “The publisher, editor or duly accredited reporter of any newspaper, magazine or periodical of general circulation cannot be compelled to reveal the source of any news-report or information appearing in said publication which was related in confidence to such publisher, editor or reporter, unless the court or a House or committee of Congress finds that such revelation is demanded by the interest of the State.”

The NUJP said the law was “precisely enacted to protect sources of reporters and the journalists themselves against any attempt to force them to identify sources who have offered information on the condition of anonymity.”

“We do not see how anyone in the supposedly august chamber can invoke national security in trying to force Ms. Herrera to divulge any confidential information. Bullying and intimidating Herrera is forcing her to violate one of the basic tenets of journalism on the protection of confidentiality of sources,” the media group said.

The group said the threat of lawmakers to cite Herrera in contempt for refusing to reveal her sources set “a precedent on House investigations involving journalists and poses a threat to the integrity of the media and journalists.”