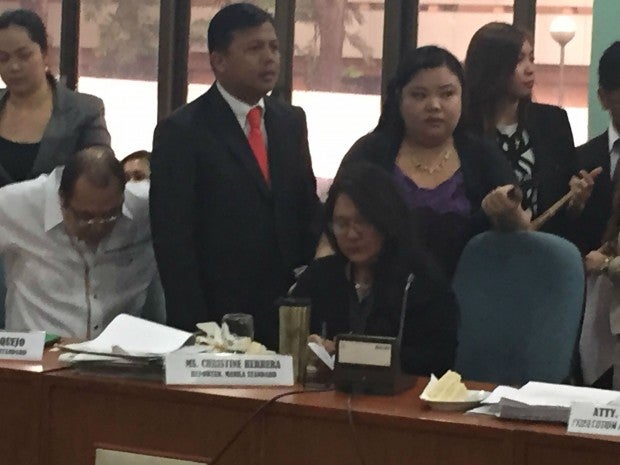 The Standard reporter Christine Herrera and two others attended the House probe on the alleged bribery from Chinese crime lord Wang Bo. Photo by Marc Cayabyab/INQUIRER.net

A lawmaker moved on Tuesday to cite a reporter for contempt after she refused to reveal the sources for her story which claimed that members of the House of Representatives received a P440-million bribe to vote in favor of the proposed Bangsamoro Basic Law (BBL).

Cavite Representative Elpidio Barzaga moved to cite Christine Herrera in contempt after she invoked Republic Act No. 53, also known as the Sotto Law, in refusing to reveal her sources.

The law states: “The publisher, editor or duly accredited reporter of any newspaper, magazine or periodical of general circulation cannot be compelled to reveal the source of any news-report or information appearing in said publication which was related in confidence…”

In her articles which came out in The Standard, Herrera said some members of the House confirmed that they received the bribe and described it as “barya barya” or loose change.