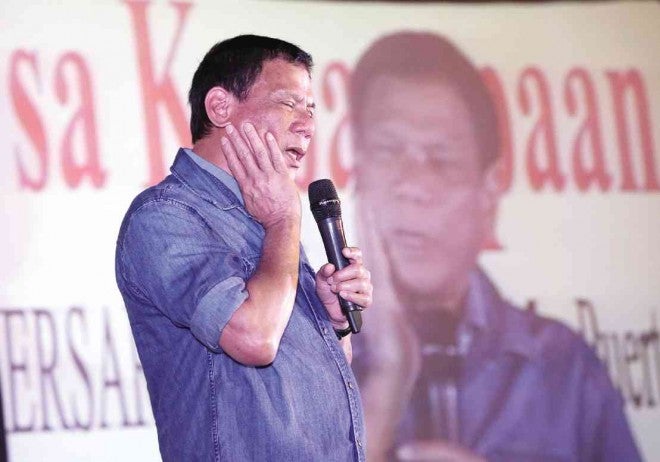 DAVAO City Mayor Rodrigo Duterte during the 33rd anniversary of the PDP Laban, a political party keen on fielding him as presidential candidate in 2016. MARIANNE BERMUDEZ

DAVAO CITY—Mayor Rodrigo Duterte, being touted as a presidential contender, is getting the support of militant women’s groups for his previously unnoticed commitment to promote gender equality and reproductive health.

Gabriela Rep. Luzviminda Ilagan said under Duterte’s watch, the city implemented a local version of the Reproductive Health Law even before the national law took effect.

“He is a strong leader. And our country needs one. Even Luzon is already excited. Political king makers are also saying that it’s high time that we get an outlier who is not from traditional politics. A new face and voice but an old hand in politics,” Ilagan said.

She said Davao City, under the leadership of Duterte, is an example for the effective implementation of gender equality and reproductive health through partnership between local government and women’s groups.

In 1997, the city council passed the Women Development Code, an ordinance that sought to protect women in the city against discrimination.

The code mandated the allocation of 30 percent of Official Development Assistance funds and six percent of city’s Annual Developmental Fund to gender-sensitive projects.

The local government also created the Integrated Gender and Development Division as a special unit that monitors and regulates the implementation of the Women Code.

To ensure the full participation of communities in the campaign, Davao City created village councils that would monitor and report cases of violence against women and children.

Ilagan said Duterte had been very active in supporting Gabriela and other women’s groups.

A Women and Children Protection Unit was also established by the local government at the Southern Philippines Medical Center to provide psychological help to women and children who are victims of physical or sexual assault.

The Central 911 Unit of the city’s Public Safety Command Center has a dedicated 24/7 desk to receive and act on reports of domestic violence through its “911” hotline.

One of the most impressive projects of Davao City, Ilagan said, is the creation of the Reproductive Health and Wellness Center that provides reproductive health education, counseling and other services.

While politicians and the Catholic Church debate over the RH Law, Davao City was already giving out free contraceptives to its residents.

“Davao City has done so many things. Duterte is not just that high profile but in his own quiet way, he supports gender development advocacy,” Ilagan said.

It seems that everybody, including his children, knows that Mayor Rodrigo Duterte is running for President, except for the mayor himself.

Duterte’s son, Paolo, currently the city vice mayor, and daughter, Sara, former mayor, are leaving no doubt that they want their father to run for President.

In a photo uploaded on his Facebook account on Monday, Paolo is seen having lunch with his father and Pampanga Gov. Lilia Pineda. Paolo called his father, “my President.” Karlos Manlupig, Inquirer Mindanao