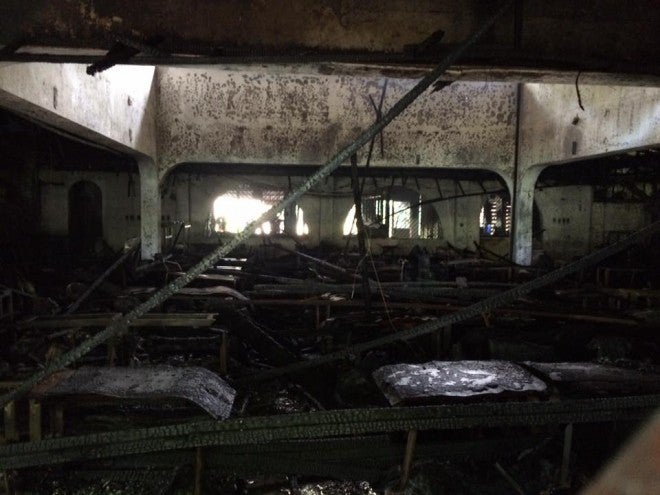 A landmark food center in University of the Philippines Diliman, which is badly damaged by a fire caused by a gas leak in one of the food stalls on Saturday, is facing a transition in management.

The College of Arts and Sciences Alumni Association (Casaa) food center stall owners’ contracts with UP Diliman Business Concessionaires Office (BCO) will expire on Monday, June 15, according to Mico Pangalangan, former councilor of the University Student Council who led the campaign to save Casaa.

The management of the canteen was recently transferred to BCO when Casaf’s contract expired, Castro said.

According to the “Save the Casaa Food Center” Facebook page launched in November 2014, the Casaa board of trustees unanimously voted to pull out from managing the food center because of the rental increase forwarded by the BCO.

The concessionaires were allowed to stay only until Dec. 15, 2014, but their contract was extended after a series of students’ protests.

Veronica Caringal, owner of the Chinatown stall in the food center, said she had not received a notice regarding the end of contract or planned bidding for new concessions.

She also said the concessionaires would file individual damage suits for negligence against Chef’s Grille, the stall where the fire started.

The fire that hit Casaa food center on Saturday injured Chef’s Grille’s owner and cook, who both suffered second-degree burns due to the explosion, said FO3 Derrick Caranto.

Quoting a nurse who was able to talk to the cook, the fire official said Ken Taliola, 27, installed a new stove but failed to completely close off the valve of the liquefied petroleum gas tank.

The gas vapor was ignited when Taliola turned on the stove, causing the blast at 9:50 a.m. that set on fire the canteen on Fernandez Street beside Palma Hall and Benton Hall of the UP campus in Quezon City.

The stall owner, Marlyn Bandiola, 53, tried to help Taliola, causing burns to her right arm. Taliola suffered burns in the upper body. They were rushed to the infirmary for first-aid then brought to East Avenue Medical Center for further treatment.

Castro said fire trucks from the Quezon City Fire Department started arriving at 10:01 a.m. The fire reached third alarm at 10:02 before it was put out at 10:30 a.m.

For students, alumni, and staff of the university, as Supreme Court spokesperson Theodore Te put it in a Twitter post, it was “a generation of memories” that went up in flames.

They shared memories of affordable meals (lasagna, Milo banana shake, chicken in creamy garlic sauce), countless hours of tambay, and their fond struggle with the Casaa “ninjas” or the busboys who efficiently cleared out plates before one could even take a last bite of their food.

The canteen has figured in a song by the popular Eraserheads band, whose members are from UP, about Shirley holding hands with a new boyfriend as they walk to Casaa.

Several Twitter users had voiced out suspicions that the fire was intentional. SFO4 Jose Felipe Arreza, however, dismissed the idea, saying a gas leak was an inconvenient way of deliberately starting a fire. RC

TAGS: CASAA, College of Arts and Sciences Alumni Association, Fire, University of the Philippines (UP), UP