Duterte: I might run for president if I beat VP Binay in surveys | Inquirer News

Duterte: I might run for president if I beat VP Binay in surveys 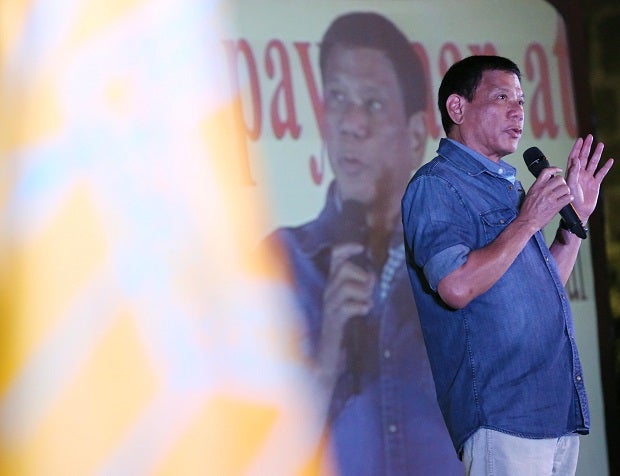 While enjoying a surge in popularity among voters, Davao City Mayor Rodrigo Duterte said that he might run for president in the 2016 elections if he beats presidential front-runner Vice President Jejomar Binay in the ratings game.

In a symposium on Federalism held in Taytay, Rizal, Saturday night, Duterte said that beating Binay’s ratings with a huge margin could push him to run for president.

He also denied that an ad which aired on national television this week came from his camp.

“Hindi akin ‘yan, kasi hindi ako [expletive] na magpadrama-drama pa (That ad did not come from me because I am not into that kind of drama),” the mayor said.

According to the latest SWS presidential survey results, Binay remained the front-runner with 36 percentage points while Duterte tied with Interior Secretary Mar Roxas in third place with 15 percentage points.

On Sunday, Duterte said that if he will be elected as president, he will consider implementing a “revolutionary government.” He also reiterated that the presidency is “God’s destiny.”