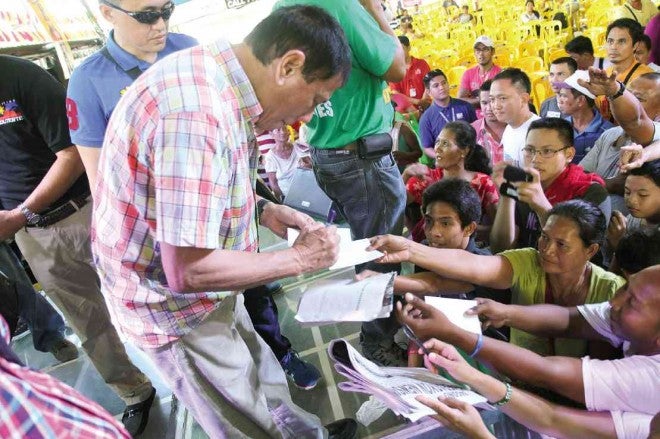 LUCENA CITY—Even without direct admission that he will join the presidential race in 2016, Davao City Mayor Rodrigo Duterte on Sunday declared he would not hesitate to place the country under a “revolutionary government” to rein in lawlessness should he become the next President.

“If I am the President, [and] I cannot achieve the reforms I want within six months or one year, I will declare a revolutionary government,” Duterte told over 1,500 multisectoral representatives who attended the National Peace, Development and Federalism Symposium held in one of the malls here.

Duterte reiterated that the presidency is God’s destiny. But he quickly added: “If God makes me the President, God will the first one to cry.”

The crowd responded with wild applause.

Under his planned revolutionary government, Duterte said he would close down all government agencies, even Congress, and use their budget allocations for the salaries of the police and military.

Duterte dared those who would oppose his planned dictatorial rule under the revolutionary government to kill him. “I’m ready to go anytime,” he said.

“I will not, I repeat, I will not sit there as President only to become a ‘kenkoy’ for an eventful term. I don’t need that.”

Duterte is being touted as a likely presidential candidate amid his soaring popularity in ratings.

But he continued to play coy about running for President next year, saying he did not have the funds for a national campaign.

But in his speech, he announced that his political party would be “Bayan.” He did not elaborate.

Apparently ignoring the advice of fellow Mindanaoan Sen. Aquilino “Koko” Pimentel III that he should start acting like a “presidential aspirant” by cutting down on the use of words “killing” and “death,” Duterte vowed that under his presidency, he would reimpose the death penalty particularly against criminals engaged in illegal drugs trade.

“Death by hanging and not by electric [chair], [the latter is] expensive,” he said.

Pimentel is president of PDP-Laban, which, he said, was almost 100 percent behind Duterte, a party member, should he decide to join the 2016 presidential race.

However, Duterte called himself “very good.”

Duterte evaded giving a categorical answer when he was asked by the Inquirer if his statements mean that he has now decided to run for President. “Whatever I said I’d do, I’d act on it. I mean what I say.”

With his usual poker face, Duterte pointed to lawyer Vitaliano Aguirre, who was standing beside him, as his would-be legal counsel against criminal charges once he finishes his term as President in six years.

Duterte then painted a scenario after his last day in Malacañang where he will be met by a policeman with a warrant of arrest on charges of genocide and multiple murders. When he was told by the supposed lawman that the charges involved killings of more than 100,000 persons, Duterte exclaimed, “Good!”

“Even if they kill me, it’s OK. We will be together in hell,” he said to the delight of the crowd.

Duterte arrived here past noon, over two hours late from his original time of arrival. However, his local supporters distributed packed lunch of rice and chicken/pork adobo to the hungry crowd.

His visit was organized by former Quezon Board Member Billy Andal, head of the Quezon chapter of the Mayor Rodrigo Roa Duterte-National Executive Council Committee, which is pushing for a Duterte presidency.

Underdog Dasmariñas vows to fight to the death vs Inoue