From just four cases two weeks ago, the total number of infections now stands at 87, including six people who have died.

The latest fatality was a man in his 80s who had been diagnosed in Daejeon, 140 kilometers south of Seoul, and died in hospital on Monday morning, local officials said.

The outbreak has triggered widespread public concern in South Korea, with 2,300 people placed under quarantine orders and nearly 1,900 schools — mostly in Seoul and surrounding Gyeonggi province — closed down.

Among the 23 new cases, 17 were infected at the Samsung Medical Centre in southern Seoul, the health ministry said. 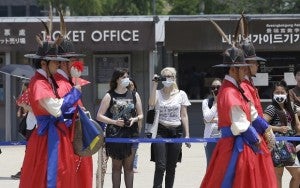 All the infections so far have been restricted to hospitals, with transmissions between patients, staff and their families.

Criticized for its initial response to the outbreak, the government on Sunday vowed “all-out” efforts to curb the further spread of the virus, including tracking the mobile phones of those under house quarantine to ensure they stay home.

Hundreds of public events, school trips and sporting events have been cancelled.

Health authorities said they were expecting to see more new cases of those who had been infected from the Samsung hospital in recent weeks.

The Samsung Medical Centre — one of the South’s largest hospitals — has placed nearly 900 patients and medical staff under observation.

More than 20 countries have been affected by MERS, with most cases in Saudi Arabia.

The virus is considered a deadlier but less infectious cousin of Severe Acute Respiratory Syndrome (SARS), which killed hundreds of people when it appeared in Asia in 2003.

Filipinos in S. Korea urged to guard against MERS-CoV

Read Next
Duterte: I might run for president if I beat VP Binay in surveys
EDITORS' PICK
NUSTAR Resort and Casino: Cebu’s next lifestyle and leisure gem
EDITORIAL: Solo parents deserve more
Enjoy the best of city living at SMDC’s Fame Residences
Step up your vlog game with vivo’s newest smartphone
No more need to quarantine foreign arrivals if fully vaxxed
Guanzon: Senator behind delay in Marcos DQ case
MOST READ
Guanzon to Bongbong Marcos camp: How do you know I had ‘minority opinion’ on DQ cases?
Guanzon gives Ferolino until Monday to release reso on Bongbong Marcos’ DQ cases, or else
Guanzon: Senator behind delay in Marcos DQ case
Marcos a no-show in another GMA interview
Don't miss out on the latest news and information.