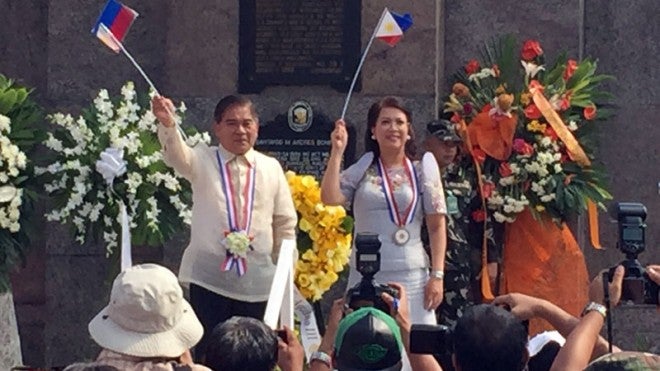 Chief Justice Maria Lourdes Sereno on Friday emphasized strict adherence to the Constitution, noting how certain “discussions” in other government branches and other sectors of society seem to be overlooking this fact.

Speaking to reporters after leading Independence Day flag-raising rites in Caloocan City on Friday, Sereno said compliance with the Constitution was a key concern of the high court and was the judiciary’s main message to the country on national day.

“The challenge for the Supreme Court is always to look at the Constitution intently. You know, our deep concern is that sometimes our Constitution is not being considered very seriously in the discussions that are going on, maybe in other branches of government, maybe even by some sectors,” she said.

“So our duty is to ensure that everything that comes out is always in accordance with the Constitution. So that is the key message for this day, I think, on the part of the judiciary,” said the Chief Justice.

Sereno did not make any specific reference, but her statements were made as debates are going on in Congress and elsewhere on the draft Bangsamoro Basic Law (BBL) to implement a proposed autonomous region for the Muslim minority—or “Bangsamoro”—in Mindanao and corollary proposals to amend the Constitution in order to accommodate the concessions to be granted the new region that are deemed to be unconstitutional.

There have also been suggestions to change the Charter to allow the lifting of term extension of the President.

Retired Associate Justice Vicente Mendoza has expressed reservations over certain parts of the draft BBL being unconstitutional, such as the one prescribing a parliamentary form of government for the Bangsamoro.

Meanwhile, Speaker Feliciano Belmonte Jr. on Friday said he was satisfied with the performance of the House of Representatives even if it failed to meet its target of passing the BBL, economic Charter change, and the antipolitical dynasty bills.

“Amidst the rising political noise anticipating 2016 and its attendant distractions, we did not succumb to empty grandstanding, opportunistic photo-ops and cheap sloganeering,” he said.

As the chamber adjourned its second regular session on Wednesday, Belmonte congratulated the 289 House members on the “golden harvest of legislation.”

Under the 16th Congress, the House has so far produced 35 laws, 541 bills passed on third reading, 24 approved on second reading and 215 adopted resolutions.

Sessions will resume on July 27 when President Aquino speaks before a joint session of Congress for his final State of the Nation Address.

Belmonte said he was particularly proud of the ratification by the bicameral conference committee of the proposed Fair Competition Act or Anti-Trust Act, an economic measure that took 26 years to pass.

He said the antitrust law would help transform the economic landscape of the country.

Acknowledging the slow progress of the BBL, which is still under the period of interpellation, Belmonte said more work needed to be done.

“It is being fine-tuned to ensure greater inclusiveness and greater efficiency in practice. We want the best law possible. We have made huge strides. But, of course, we have a long way to go,” he said.

When it adjourned sine die on Wednesday, the House did not take up two of the most contentious pending measures: Resolution of Both Houses 1, which would pave the way for the lifting of economic restrictions of the 1987 Constitution, and the antipolitical dynasty bill.

The House did not have the numbers to pass the two measures.

In the second regular session, which began in July 2014, Congress was able to pass 16 bills that the President signed into law.

These include the annual and supplemental budgets; Republic Act No. 10653, raising the ceiling of taxes imposed on the 13th month pay and other employee benefits; RA 10645, mandating Philhealth coverage for senior citizens; RA 10656, postponing the Sangguniang Kabataan elections, and RA 10655, repealing the law penalizing premature marriages.

Also expected to pass into law are two bills providing for the “open high school system” for out-of-school youths and adults, and promoting positive and nonviolent discipline of children, both of which have passed third reading.

Under bicameral consideration are the Unified Student Financial Assistance for Higher and Technical Education Act, and the Act Strengthening the Probation System.

A bill amending the Cabotage Law is also expected to be sent to the President soon for signing into law.

Sereno: I do not serve Presidents, excuse me…