Sereno: I do not serve Presidents, excuse me... | Inquirer News
Close
menu
search

Sereno: I do not serve Presidents, excuse me… 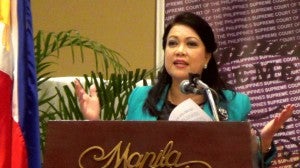 MANILA, Philippines–She does not serve any President and she doesn’t have to endure anyone, either.

Brave words, and they came from no less than the country’s top magistrate.

Chief Justice Maria Lourdes Sereno made that point clear on Thursday when she was introduced at a press forum as a chief magistrate who would “probably serve three more Presidents,” with her term lasting up to 2030.

“I do not serve Presidents, excuse me …. That’s unforgivable,” Sereno said at a forum of foreign correspondents in Pasig City.

Asked if she preferred the word “endure,” Sereno said, with a smile: “Well, I don’t necessarily have to endure anyone, either.”

Such a statement seemed to reflect Sereno’s staunch advocacy of judicial independence, which came under fire recently after the Supreme Court struck down as unconstitutional Malacañang’s Disbursement Acceleration Program (DAP).

Malacañang has a pending appeal to the unanimous July 1 court ruling finding the presidential discretionary fund system a violation of the budget law.

President Aquino himself warned of a judicial overreach following the ruling. Aquino also said he was open to amending the Constitution, if only to keep the powers of the judiciary in check.

Consistent with her earlier position, Sereno said the matter of constitutional amendment was “something that is completely political.”

She defended the DAP ruling, saying: “If I believe the court has been too powerful, I would have been the first to say I would not have decided on [the] case.”

Careful not to touch on the merits of the case, as it is on appeal, Sereno said: “I fully believe that the court has been within its bounds.”

Touching on the “theory” that the court was overextending its powers, Sereno said: “Maybe what is needed now is the definition of the term, the thinking that the judiciary is too powerful. What do they precisely mean when [saying] we are too powerful?”

“I still have to find a comprehensive explanation of that theory. What I know is that we have to do everything within our power to deliver justice,” she added.

Sereno urged the government to support judicial reform efforts, citing an expansive program to speed up trials through automation and a proposal to discipline the ranks of the judiciary—all with the goal of restoring public trust in the justice system.

“I am asking them for support …. We will see that in the final budget…. My feelings about things, those are side issues. I must press on,” said Sereno, who has often noted the lack of government funding support for judicial reform programs.

“We are in a position to right now address the public’s dissatisfaction with a justice system brought about by a perception that justice is slow and in favor of those who have the material wherewithals in life,” Sereno said in her opening remarks.

She cited the proposed Continuous Trial System, the guidelines for which are being drafted by volunteer Regional Trial Court (RTC) judges in Manila and in Makati and Quezon cities.

Under the system, the court hopes to speed up the resolution of cases from years to just weeks, or even days for simple cases, Sereno said.

“If we can get to that point, people’s anger against the justice system will not be so intense and people will believe that there can be fairness in life,” she said.

Coupled with that, Sereno said the judiciary was continuing to cleanse its ranks.

The Court of Appeals is investigating four RTC judges alleged to have “sold” decisions to a court fixer known as “Ma’am Arlene.”

Notaries are also being investigated for allegedly allowing the abuse of their notarial seals by businesswoman Janet Lim-Napoles, alleged brains in the P10-billion pork barrel scam.

Just last month, the high court dismissed Sandiganbayan Associate Justice Gregory Ong for his “corrupt inclinations,” as supposedly shown by his links to Napoles. Ong is appealing the court ruling.

“I hope it has been impressed upon you … that we are very concerned about our duty to be accountable as judges and court employees to the people we serve by providing the type of justice that is beyond the reach of money and influence,” Sereno said.

“We are determined to turn this critical point in our country’s history to something that can really be a page-turner in our life as a people,” she said.

Sereno also said there was a current inquiry into the slow enforcement of court orders, particularly in cases of extrajudicial killings, including those with journalists as victims.

“I am dissatisfied with the level of enforcement of judicial writs,” she said. “Our courts in the provinces have been acting but many police forces, local police forces, have refused to implement our orders. That includes cases involving journalists.”

The Philippine justice system has long been notorious for its slow pace with even simple cases dragging on for years. This has taken its toll on the trial for the country’s worst political massacre, the murder of 58 people in November 2009.

Sereno said the Maguindanao massacre case, which became a symbol of the impunity that, critics say, powerful figures enjoy, might not be decided before President Aquino steps down in mid-2016.

“With the way things are going, I don’t think anyone can make this kind of promise,” Sereno said.

The court has yet to start the main trial of the accused—members of a powerful political clan who allegedly carried out the killings to prevent a rival from standing against one of their candidates.–With a report from AFP