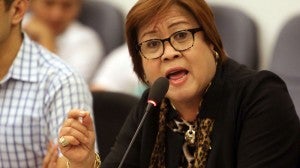 “I’m waiting for supplemental affidavits from the whistle-blowers to further strengthen the case,” De Lima told reporters after a meeting with members of the National Bureau of Investigation special task force and their supervisors led by Undersecretary Jose Justiniano.

In a talk with reporters, De Lima declined to identify the lawmakers involved, but she said the additional documents would “address the issue of forged signatures.”

De Lima did not give a timetable for submission of the supplemental affidavits, or when the letter-complaint prepared by the NBI task force for her approval would be sent to the Office of the Ombudsman.

The filing of the third and final batch of PDAF scam cases has been delayed for about a year due to the NBI’s supposedly lengthy review and evaluation of the documents given by the whistle-blowers as well as the protracted efforts to obtain more evidence from agencies such as the Department of Budget and Management.

The Commission on Audit earlier released its report on the PDAF scam covering the years 2007 to 2009. This and the testimonies of the whistle-blowers were used in the filing of cases against the first and second batches of incumbent and former legislators, and other government officials and private individuals including alleged scam mastermind Janet Lim-Napoles.

De Lima earlier said politics would not be a consideration in her final review of the cases.

“It’s the same standards, the same process [applied in the first and second batches] that I will be using here. And among those standards is that we never look at political colors. We never did from Day One,” she said.

De Lima and Justiniano earlier said some of the respondents in the investigation were claiming that their signatures in the PDAF-related documents were forged.

The justice secretary said she wanted to know from the panel the effect of such claims on the cases that would be filed.

Justiniano said the investigating team’s report would address the issue of the forged signatures.

“The NBI in fact, has had findings [in the earlier batch of cases filed] that there were signatures which were forged. What we studied is that if this could be raised as a defense in the cases that we filed. But according to the Ombudsman, this is not a defense, because the case filed was not falsification. The NBI said there were signatures that could not be determined if they were forged or not, but there are also those confirmed to be forged,” he recounted.

“We believe that even if your signatures were forged, it’s not a defense. They should raise it as a defense before the Ombudsman and, if the case progresses, to the court. There are other things that you did which could be enough basis for you to be charged. Signatures are not only the bases,” Justiniano added.

The undersecretary recalled that the whistle-blowers in the scam had admitted that they themselves forged documents such as endorsements, project listings and memorandums of agreement (MOAs) that led to lawmakers’ PDAF being siphoned off and channeled to ghost or overpriced projects set by the nongovernment organizations (NGOs) that Napoles founded.

He summed up the case to be built against the respondents: “They chose a project, which was funded by PDAF and for which a special allotment release order was made. It was endorsed to a Napoles NGO and a MOA was executed. The problem is the funds were misused and the NGOs were fake. The question now is who should be held responsible, when the PDAF was yours?”

Justiniano said the most important documents being sought by the NBI were the project listings and endorsement letters that the legislators signed and sent to the House Speaker or Senate President asking that government funds set aside in the national budget law be allocated to specific projects.