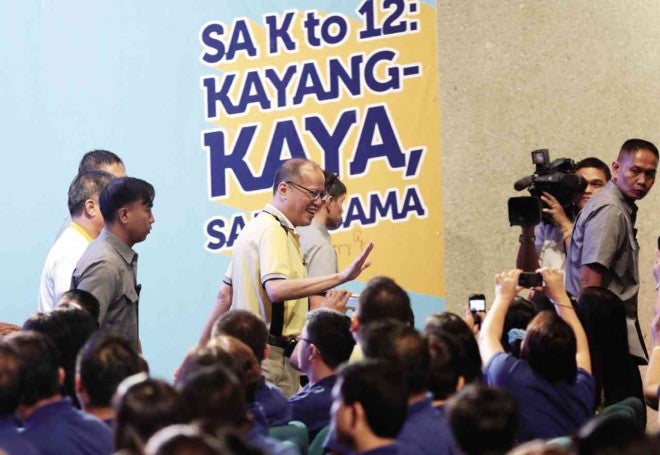 ALL SET President Aquino waves to the crowd at the Philippine International Convention Center where he told a Department of Education gathering that the country is now ready for the start of the government’s K to 12 education reform program. GRIG C. MONTEGRANDE

A defiant President Benigno Aquino III on Friday said the country was “ready” for the K-12 program as he brushed aside criticisms of the law from a group that held a protest rally while he spoke at the Philippine International Convention Center (PICC).

“Despite the initiatives we have accomplished, we know there are still some who say we are not ready. This is our answer to them: We are ready,” the President told the crowd who attended the Department of Education (DepEd) event, “K to 12: Kayang Kaya, Sama Sama” meant to celebrate the second anniversary and milestones of what the DepEd described as “the biggest education reform in the country.”

Mr. Aquino said the K-12 program, which adds two more years to the 10-year basic education cycle, was the result of “years of planning and careful consultation” with lawmakers, local government officials, the private sector and other stakeholders including the Technical Education and Skills Development Authority (Tesda), the Commission on Higher Education (CHEd), the Department of Labor and Employment, and the Department of Trade and Industry.

“We have enough funds … and the capacity to address the needs (of) the educational sector,” the President said.

READ: Aquino: K to 12 program not a burden; PH ready for it

Mr. Aquino also addressed the fear expressed by K-12 detractors that thousands of teachers would be displaced by the two-year transition to the expanded education cycle.

“With the implementation of the K-12, we will need not less than 30,000 teachers (for the new senior high school level),” he said.

The President added that teachers in state universities and colleges who wish to take their master’s and doctoral degrees could “use the two-year transition phase” to do so.

Mr. Aquino also cited the accomplishments of the DepEd under the helm of Education Secretary Armin Luistro, among them addressing the lack of textbooks, classrooms and chairs.

“Additional needs” brought about by the implementation of the K-12 program were also being addressed, the President said, adding that in 2014, 33,607 classrooms were constructed, while an additional 31,728 have been funded for construction this year.

The two-year extension under the K-12 program would also give “enough time” for the students’ learning “to ripen,” sacrifices that, Mr. Aquino said, would “lead to positive transformation the next generations will benefit from.”

The President also took a swipe at the Alliance of Concerned Teachers (ACT) protesting outside the PICC, who described the program as “another disaster in the educational system.”

“When the time comes, all those against (the K-12), when they see it succeed, would say ‘If I didn’t criticize them, I wouldn’t have made K-12 a (good program),’” the Chief Executive said. 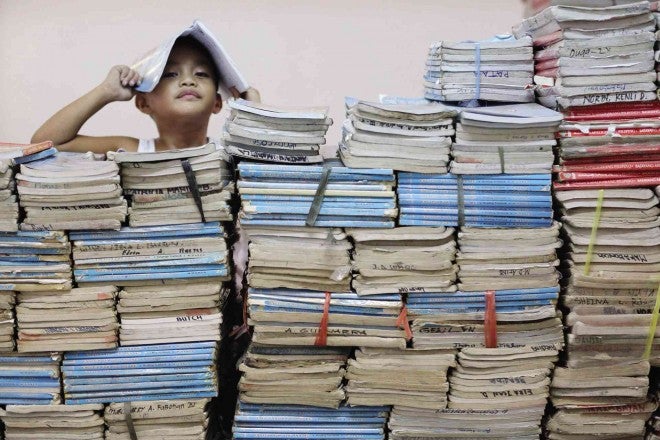 GETTING READY Grade schooler Robby Zamora looks over a mountain of textbooks at Commonwealth Elementary School in Quezon City as he tries to help his father, a teacher and property custodian in the school, prepare for Monday’s reopening of classes. Robby is one of millions of children going to school for the first time under the government’s K to 12 education program. JOAN BONDOC

He added: “Really now, our critics sometimes sound like they are God’s children, only they know what’s best. Well, we’re leaving it to God to deal with them. (Bahala na ang Diyos sa kanila).”

Unable to resist a last jab at the group of ralliers, the President said: “We heard they’re only about 20, but that they’re carrying five banners each. You just might hear them complain about unfair labor practice because of that,” he added, drawing laughter from the audience.

ACT national chair Benjie Valbuena said the group would later go to the Supreme Court to ask that the implementation of the K-12 program be “totally suspended.”

Also yesterday, another alliance against K-12 asked the high court to strike down as “unconstitutional” the government’s flagship education reform program.