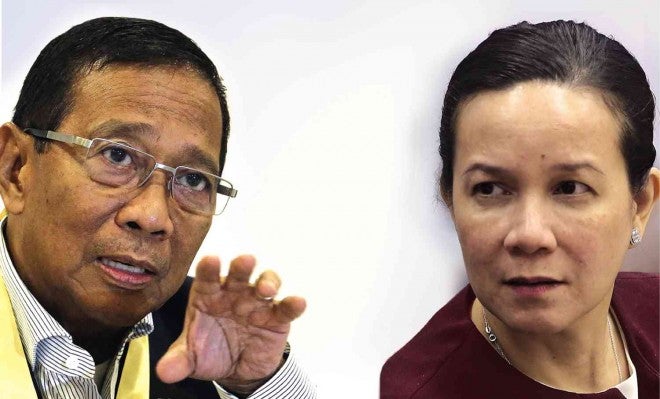 Poe was one of the first four senators who signed the draft partial report, according to Sen. Aquilino Pimentel III, chair of the blue ribbon subcommittee that investigates charges of corruption against Binay over the construction of Makati City Hall Building II during his tenure as mayor of Makati.

Poe confirmed that she signed the report, saying there was nothing that contradicted the evidence presented during the 21 hearings.

“I have read the subcommittee recommendation and found the same supported by documentary evidence as well as expert and personal testimonies that remain unrebutted by competent evidence to the contrary,” Poe said in a statement.

The findings should be investigated by the Ombudsman and criminal charges filed, just like the Senate inquiry into the P10-billion pork barrel scam, she said.

“As in the PDAF (Priority Development Assistance Fund) inquiry, I join my colleagues in seeking further investigation by the Ombudsman of the matter and the consequent filing of the appropriate criminal complaint, which in this instance appears to be plunder,” she said.

Not running with Binay

Poe’s signing the report indicated that she had finally decided not to run with Binay in next year’s presidential election.

Binay’s United Nationalist Alliance (UNA) party has said it was considering Poe as a vice-presidential running mate for Binay.

But Poe is an emerging presidential candidate, placing second to Binay in the polls.

And she has said that she does not see herself running with Binay, as they differ in style of public service and as she believes that honesty and openness to public scrutiny are important to the job.

Interior Secretary Mar Roxas, the ruling Liberal Party’s (LP) presumptive presidential candidate, has asked Poe to be his vice-presidential running mate. She has not made any commitments to him, though.

An official of UNA warned Poe against joining the LP, saying she might be teaming up with people who cheated her father, the late movie actor Fernando Poe Jr., in the 2004 presidential election.

Poe countered that UNA also has allies involved in the cheating.

Binay was the campaign manager of FPJ, who died of a stroke seven months after losing the presidential election to Gloria Macapagal-Arroyo.

“The Vice President is sad because it looks like Sen. Grace Poe has sided with the senators persecuting him and his family and bullying innocent people,” lawyer Rico Quicho, a spokesperson for Binay, said.

“We hope Senator Poe has read the affidavit submitted by the Vice President but ignored by the subcommittee. In that affidavit, we clarified the issues and explained why the accusations against him had no basis,” Quicho said.

Quicho stressed that accusations against any government official must be based on credible evidence and not on “perjured and polluted sources.”

“Plunder is a serious charge [that] must be fully established based on facts and prevailing jurisprudence before requiring an impeachable official like the Vice President to explain his innocence,” Quicho said.

Asked on Friday whether she was concerned that her signing the report could affect her ties to the Vice President, Poe acknowledged Binay’s work with her father, but said she was also upholding the values that her father cherished.

“I acknowledge his loyalty to my father, but I am loyal, too, to my father’s moral beliefs and principles in governance and transparency,” Poe said.

In a radio interview on Friday night, Poe said she strongly believed that there was wrongdoing in the construction of Makati City Hall Building II.

“Was this deliberate on their part? I think it’s hard to say that it was not because there was a big amount [involved],” she said.

Poe said she believed the scandal was a big issue for the country and that there was a need to show the people that everyone, whether rich or poor, powerful or not, is equal in the eyes of the law.

Aside from Poe and Pimentel, Senators Alan Peter Cayetano and Antonio Trillanes IV, both members of the subcommittee, also signed the report.

Speaking in an interview with Radyo Inquirer, Pimentel said Poe had not joined the inquiry, but he had been regularly updating her on the developments.

Pimentel also said Poe read his findings before signing the report. He noted that his report was only 47 pages long, making it easy for her to read immediately after being given a copy.

“I was not surprised [that she signed the report] because she has long told me to update her about the results. We’re seatmates [in the session hall]. When we’re seated together, we talk and she asks me, ‘What happened in your hearing?’ I tell her about it. So Grace Poe is updated,” he said.

He said that when he told Poe that he already had a partial report, she asked to read it.

“After a few hours, she signed it,” he said.

In a separate text message, Pimentel said Poe’s signature on the report meant that she agreed “with the general tenor and findings.”

Pimentel, who declined to confirm or deny the contents of his partial report, said it would need nine signatures before it would become an official blue ribbon committee report and could be released.

He said he would see if he could get nine signatures by Monday, adding that he was certain of getting at least three more early next week.

Others to be charged

Binay: I will run against Poe