Binay: I will run against Poe 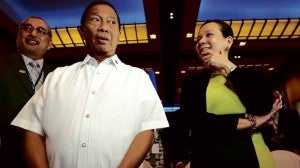 MANILA, Philippines — Vice President Jejomar Binay said Monday that he would fight Senator Grace Poe should she run for president against him in 2016.

Asked over dzRH if he would pursue his bid if the administration picked Poe to be its standard-bearer in 2016, Binay said: “Opo naman.” (Of course.)

He recalled that immediately after the elections in 2010, he already declared his intention to become president.

“Kinabukasan matapos ang halalan, nagpahayag na ako. Talaga namang naghanda ako para maglingkod bilang pangulo ng ating bansa,” Binay said. (The day after the elections, I made the announcement. I have prepared myself to serve as the next president of the country.)

“Tutuloy akong magkakandidato kahit sino pa po ang makakalaban,” he added. (I will run no matter who I run against with.)

Binay stressed, “Ang issue sa darating na halalan ay karanasan at kakayahan.” (The issue in the upcoming elections would be experience and capability.)

The Vice President has remained the top choice of 28 percent of voters, according to the latest Pulse Asia survey. Poe is second with 18 percent.

However, unlike Binay, Poe has repeatedly said that she had no plans of joining the presidential derby.

And while they were being pitted against each other, Binay said that he and Poe could run together.

But he said it was too early to say who his vice president would be.

He added that those who would not be his running mate would be his “foe.”

“Maraming gustong maging vice president ko. Yung hindi ko mapipili, ginawa ko nang kalaban ‘yon,” Binay said. (Many want to become my vice president. Those whom I will not choose, I will already consider as foes.)

The Vice President admitted that he was still considering businessman Manny Pangilinan as his running mate, though the he had yet to accept his invitation.

Binay said he was no longer considering Senator Ferdinand “Bong-Bong” Marcos Jr. as a running mate since there was a chance the senator would again return for the Senate.

Marcos is a member of the Nacionalista Party (NP) headed by former Senator Manny Villar.