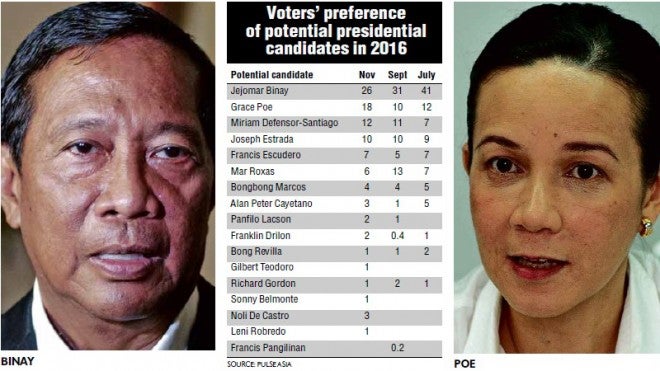 The voter preference ratings of Vice President Jejomar Binay (left) continued to take a dive in November while those of neophyte Sen. Grace Poe (right) surged, according to a Pulse Asia survey.

MANILA, Philippines–Vice President Jejomar Binay’s voter preference ratings continued to take a dive, going down 5 percentage points in November after plunging 10 points in September, according to a Pulse Asia survey.

In contrast, the ratings of neophyte Sen. Grace Poe surged, dislodging Interior Secretary Mar Roxas from second place on the list of candidates voters would choose to head the country.

Results of the nationwide survey, conducted from Nov. 14 to 20, showed that Binay continued to lead the pack of potential candidates for president with a 26-percent rating. But this was down 5 percentage points from his previous 31-percent rating in September and 41 percent in July.

Poe’s rating, on the other hand, jumped to 18 percent from 10 percent, placing her in second place, up from fourth place in September.

Poe declined to comment on the results, saying she has yet to see the report.

The survey covered 1,200 respondents, 18 years old and above, and had a margin of error of plus or minus three percentage points.

The respondents were asked, “Of the people on this list, whom would you vote for President of the Philippines if the 2016 elections were held today and they were candidates?”

In third place was Sen. Miriam Defensor-Santiago, who had 12 percent, followed by former President and now Manila Mayor Joseph Estrada, with 10 percent.

Sen. Francis Escudero had a 7-percent rating, while former second placer Roxas was sixth with 6 percent, down from his previous 13 percent.

The ratings of the Vice President have been taking a hit since a Senate blue ribbon subcommittee began its inquiry into alleged irregularities in Makati City during his term as mayor, starting with the alleged overprice of the P2.28-billion Makati City Hall Building II.

The subcommittee has since heard testimony from Binay’s former allies, led by former Makati Vice Mayor Ernesto Mercado, that he had received kickbacks from infrastructure projects and used dummies to hide his wealth, including a 350-hectare high-end agriculture estate in Rosario town, Batangas.

Binay has vehemently denied the allegations. He and his camp branded the inquiry a farce that was intended to bring down his high ratings, especially since two of the active members of the Senate panel, Cayetano and Sen. Antonio Trillanes IV, have plans to run for higher office.

The Pulse Asia survey was conducted not long after Binay backed out from a debate with Trillanes. It was the Vice President who proposed holding the debate.

Trillanes castigated Binay’s decision and disclosed that the then Makati mayor had conspired with rebel soldiers for the overthrow of the Arroyo administration. Binay, however, allegedly reneged on his word to send support for the renegade soldiers, Trillanes said.