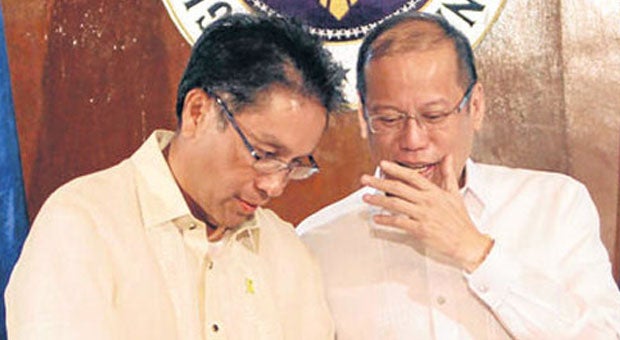 “Nagpapasalamat ako sa pangulo sa tiwala na ibinigay nya sa akin. Malinaw ‘yung kanyang sinabi at tinatanggap ko ito ng buong puso (I thank the President for the trust he has given me. What he said was very clear and I accept it wholeheartedly),” Roxas in an ambush interview in Dona Remedios Trinidad town in Bulacan on Tuesday.

Roxas said this when asked to comment on Aquino’s earlier statement that he remains the top choice as the President’s successor in the 2016 presidential race.

When asked if he’s ready for the upcoming presidential elections, Roxas said: “Maganda na ang kinalalagyan natin ngayon, hindi naman ito perfect, pero malaki na ang na-advance natin. (We are in a good place now, it is not perfect, but we can advance further).”

Roxas has been touted the presumptive standard-bearer of the ruling Liberal Party. It can be recalled that Roxas gave way for Aquino, then a senator, to run for the 2010 presidential elections.

He had also expressed confidence that he may be the strongest contender for presidency in 2016.

Rumors are rife that Roxas will step down in June as the Department of Interior and Local Government secretary to prepare for the presidential polls. However, in previous interviews, he denied resigning as DILG head.

Aquino said LP will announce who will be the party’s standard-bearer in the 2016 elections when he delivers his last State of the Nation Address in July.

“Naniniwala ako na itong pag bibigay niya ng tiwala sa akin ay hindi lang para sa akin kundi para sa lahat sa atin na kasama niya sa mga reporma na nasimulan na natin noong 2010 at patuloy na nangyayari ngayon (I believe the trust that has been given to me isn’t only for my own sake but for all those who are with the President’s reforms he started in 2010 that still goes on up to now),” he said. TVJ

Surprise: Roxas tells LP he will run in 2016

Read Next
‘Goodies’ may be dangled to get senators’ support for BBL – Osmeña
EDITORS' PICK
Karding damage to infrastructure at P23M
Bongbong Marcos says PH ‘open for business’ with new Clark Airport terminal
Sierra Madre stands up to Karding, but needs protection vs the humans it saves
Reignite your passion with the vivo Y35
House energy committee chair Arroyo bats for cheap electricity
UNFPA Philippines Career Opportunities
MOST READ
Badoy not with Office of the President, NTF-Elcac, under Marcos admin — solon
Angelica Panganiban ‘duguan, sugatang mom’ one week into breastfeeding
LPA enters PAR, may develop into tropical depression
Charges readied vs gov’t guard with P290-M deposits
Don't miss out on the latest news and information.