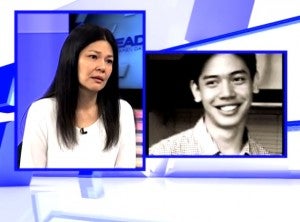 On the morning of the day before he jumped to his  death on February 6, 2015, then 18-year-old Liam Madamba  was his  usual self that he even asked his father to teach him how to shave.

“That morning, February 5, he was that usual calm, just his usual self. He had asked my husband to teach him how to shave,” Liam’s mother, Trixie, recalled when she faced the hearing of the Senate committee on education, arts and culture on Tuesday.

Liam also texted his mother that morning to remind her to buy hair wax and facial cleanser using the last of his Christmas money.

At 2:45 p.m., Trixie said they picked up her son from the British School Manila (BSM) and when they were getting off their car, “I saw his face, it was unusually drawn and long and sad.”

“And then my husband and I went off on our errands. Liam prepared merienda for his younger siblings and then past 5 o’clock, he just said to them bye and then he disappeared— without a cellphone, without any money. He just got up and left so he had disappeared for close to 14 hours,” Trixie said.

The following morning, around 6 a.m., Liam jumped to his death from the sixth floor of a car park building in Makati City.

And Trixie was almost certain that her son took his life after he was “threatened, humiliated and pushed to the edge” by his professor, Natalie Mann over an essay which allegedly contained plagiarized lines.

She broke into tears as she recounted during the hearing how the incident had led to her’ son’s death.

Unknown then to the mother, the professor called Liam and another student to a private meeting on February 5 to talk about the allegedly plagiarized essay.

Trixie said that without her knowledge also, the professor made Liam write a letter of apology addressed to the entire student body.

“When you are asked to address a letter of reflection to the whole school community, how is this introspective? Why was he not supervised during this part of the process? And afterwards, why did Mrs. Mann not sit down with Liam to go over the points he wrote to help him reflect on these?” she asked.

“This letter was not a reflection but public humiliation. Let me make this clear. This letter writing was punitive. This form of public flogging is within the reflection process that BSM claims to be so proud of,” she added.

Trixie said the letter of apology was only given to her by the school head, Simon Mann (not related to Natalie Mann), two months after Liam’s death.

“Liam used words and phrases like ‘my unending selfishness,’ ‘a thousand shades of the darkest emotions.’ He used the word ‘shamed’ twice,” she said.

“Had I seen the letter, as a mother, I would know that a red flag was up; had a caring educator read this letter, she/he would know a red flag was up and that the child was going through seriously alarming  emotional distress. Mrs. Mann did not even bother to read Liam’s letter.”

READ: Management has got to go

Trixie said the professor left even before the school started its investigation on the incident.

The mother lamented that even after her son’s death, the board of the school gave its full support to the professor.

“To the mothers and fathers in this room, put yourself in my shoes. In the face of such lack of compassion, stonewalling, insensitivity and inaction on this part of the school administration under Simon Bewlay and Simon Mann, what would you do?” she further asked.

Bewlay is chairman of the BSM’s board of governors. IDL