BBL: Gov’t hit for lack of consultations with indigenous peoples

Undersecretary Jose Lorena of the Office of the Presidential Adviser on the Peace Process (Opapp) took the hot seat, as Secretary Teresita Quintos-Deles and chief negotiator Miriam Coronel-Ferrer had previous engagements.

Deles and Ferrer had a bad time in earlier Senate hearings on the massacre of 44 Special Action Force commandos on Jan. 25 in an MILF-controlled area in Maguindanao province that sparked widespread indignation and delayed Malacañang’s timetable for the approval of the Bangsamoro Basic Law (BBL).

During the four-hour hearing, other representatives of sultanates and indigenous peoples decried that they likewise had been excluded in the peace negotiations. Their lament highlighted the penultimate hearing on the BBL.

The final hearing on June 3 will hear representatives of local governments who likewise claimed they were not consulted.

Lorena said the Philippines’ claim on Sabah had not been abandoned. He also said a government committee was studying the Sabah claim.

Last week, the House BBL committee passed a version of the autonomy bill selected by President Aquino after two meetings with his House allies in Malacañang. The Palace denied news reports that the congressmen were promised P50 million in pork barrel projects and P1 million in cash if they voted to approve the BBL.

Rep. Rufus Rodriguez, who earlier said there was a consensus in his committee that six provisions in the BBL were unconstitutional, steered the swift passage of the BBL with only minor changes. He denied criticisms that he “railroaded” the Palace version of the BBL. 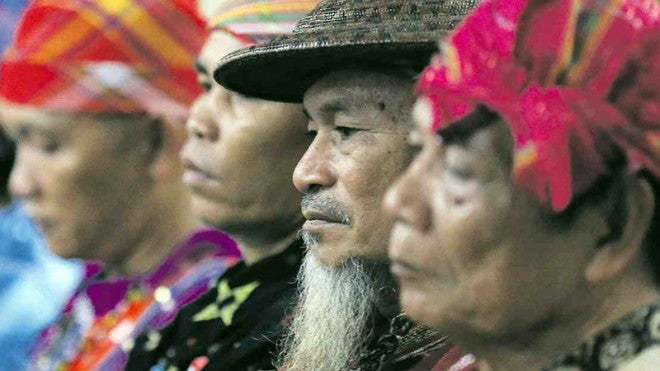 THEIR HOMELAND, TOO Representatives of the indigenous peoples of Mindanao, dressed in colorful traditional costumes, attend a Senate hearing on the proposed Bangsamoro Basic Law on Monday. RAFFY LERMA

Sen. Miriam Defensor-Santiago, chair of the Senate committee on constitutional amendments, is circulating a draft report raising constitutional infirmities in the BBL, which Malacañang wanted approved by June so that it could be mentioned in President Aquino’s final State of the Nation Address on July 27.

Malacañang has said that those who object to the BBL may go to the Supreme Court.

Several hundred supporters and opponents of the BBL held demonstrations outside the Senate during the hearing yesterday.

A Marcos critic, Abdul Malik Cleofe, blasted the Senate panel’s “sluggishness” in approving the BBL, indicating a “lack of commitment to the realization of peace.”

Cleofe’s group urged Marcos to do a “Rufus Rodriguez” and fast-track the passage of the BBL, which would establish a new autonomous region for Muslims in Mindanao.–With a report from Maricar B. Brizuela