Aquino open to dialogue with senators on BBL 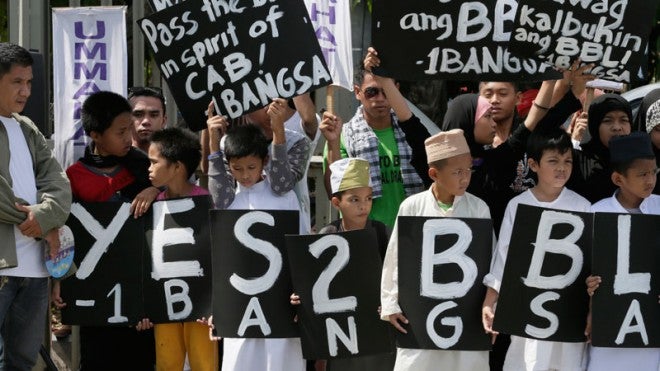 Filipino Muslims display placards during a rally at the Philippine Senate to coincide with the hearing at the Upper House on the passage of the Bangsamoro Basic Law (BBL) on Monday. President Aquino on Monday offered to discuss with senators their reservations about the proposed BBL, which swiftly hurdled a House committee after a meeting with him in Malacañang. AP PHOTO/BULLIT MARQUEZ

President Aquino on Monday offered to discuss with senators their reservations about the proposed Bangsamoro Basic Law (BBL), which swiftly hurdled a House committee after a meeting with him in Malacañang.

Under fire for the alleged railroading of the bill by the House BBL committee, Aquino said he would await word from Senate President Franklin Drilon on whether he would still need to talk to senators.

“If they want to talk to me about this so that I won’t appear to be intrusive, if they would invite me to share my opinion in a meeting, why wouldn’t I do that? We’re very ready for that,” the President told reporters.

While the Malacañang-controlled House of Representatives was keen on passing the draft BBL by Aquino’s sixth and final State of the Nation Address (Sona) on July 27, senators were not as optimistic they could meet the deadline.

Sen. Ferdinand Marcos Jr., who heads the local government committee, said: “All senators do not want what happened in the House to happen in the Senate.”

The President expressed confidence that legislators would “see that [the BBL] will withstand the test of constitutionality.”

The BBL to be passed by Congress will require a plebiscite. Once the BBL is ratified, the existing Autonomous Region in Muslim Mindanao will be considered abolished and a Bangsamoro Transition Authority (BTA) will be appointed.

Aquino said the proposed BTA shouldn’t be created as late as January next year, by which time “they won’t be able to do anything anymore.”

“Then people would say they have no use,” he said.

Also on Monday, House leaders slammed Marcos and Sen. Francis Escudero for suggesting that the two chambers of Congress were headed for a clash due to irreconcilable versions of the proposed BBL.

“Those candidates are just trying to make themselves look good,” Speaker Feliciano Belmonte Jr. said of Escudero and Marcos.

He said the senators should first pass their version of the BBL before speaking of scenarios during the bicameral conference, when differences between the approved versions of the House and the Senate would be reconciled.

“Let them pass it first before they talk of bicam,” Belmonte said in a text message.

On Sunday, Escudero said it was “impossible” that President Aquino would be able to sign the BBL before his last Sona, as the two chambers would likely have a bruising battle during the bicameral conference as a result of “very different versions” of the measure.

Marcos vowed the Senate would not allow the “railroading” of the bill that allegedly happened in the House.

The House BBL panel last week approved a version of the bill that was drafted in Malacañang in President Aquino’s company on May 18.

The speedy approval at the committee level over three days sparked criticisms and speculations that Aquino influenced the drafting of the final version, and the subsequent voting.

Cagayan de Oro Rep. Rufus Rodriguez, the committee chair, said in a telephone interview that Escudero and Marcos were taking their cue from recent surveys indicating scant popular support for the BBL.

A Pulse Asia survey in the first week of March showed that 44 percent of the 1,200 respondents polled “disagreed” with the passage of the BBL, while only 21 percent agreed. More than a third of the respondents, or 36 percent, were undecided.

Rodriguez said the amendments approved by his 75-member panel last week resolved the problems of constitutionality that were raised by the senators and other critics of the BBL.

Aquino willing to ‘break protocol’ to sell BBL to senators