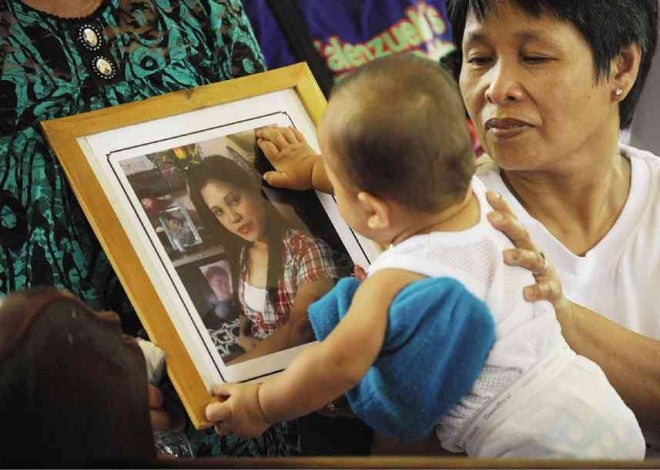 A CHILD touches the picture of his mother, one of the factory workers killed in the May 13 Kentex fire in Valenzuela City, during a special Mass held for the victims over the weekend. Of the 72 victims, 69 have yet to be identified as their bodies were burned beyond recognition. AFP FILE PHOTO

Before the families of nearly 70 workers who died in a footwear factory fire in Valenzuela City, the company owner’s daughter asked for forgiveness and a little more patience.

“I think they deserve to hear ‘sorry’ from the owners. But we are not saying it’s our fault. This is an accident,” Barbara Ang, eldest daughter of one of Kentex Manufacturing Inc.’s shareholders, told reporters after the dialogue with the families.

Seventy-two people, including the son of one of the owners and a part-owner, were killed on May 13 as fire gutted the 3,000 square-meter slippers factory with three adjoining buildings on Tatalon Street in Barangay Ugong.

“Their families died while working for us. I think it is our moral obligation to ask for forgiveness,” Ang said.

While some families accepted the apology, others said it was not enough.

Helen Belando, 61, whose son Sammy died in the fire, said she accepted the daughter’s apology.

“It was nobody’s fault. We are not the only ones who lost our loved ones,” said Belando, who traveled from Hinoba-an, Negros Occidental, to bring the remains of her 27-year-old son to their hometown.

But Niño Bartonico, who lost his brother Vincent to the fire, said, “apology is not enough, we want justice.”

“We want someone to be held accountable for what happened. Obviously, there were no fire exits,” said Bartonico, who also worked at Kentex as a delivery boy.

Wearing white shirt and stripped of makeup, Ang faced the families who gathered at the Barangay Ugong assembly hall to reassure them they would not run away from their responsibilities.

“This is not the best time to point fingers on who to blame or who is at fault,” she said in Filipino.

“We are all going through the same thing. This is also our darkest hour,” she said.

Ang’s 80-year-old father Veato Ang was rushed to the hospital a few hours after the fire.

Her father was shocked so he had to be brought to the hospital, she said in an interview.

“We’re just glad he did not suffer from stroke,” she added.

Guan King Ong, one of the factory owners, suffered from third degree burns and lost his son Tristan to the fire.

Tristan was on the ground floor when the fire broke out but survivors said he went up again for the employees on the second floor, Ang said.

His father Ong sustained burns as he tried to save him, she said.

Ang said it took them a while to meet the families because they were also recovering from their loss in the past days.

“Our commitment is to help as much as we can. We are gathering funds. If they need anything besides financial assistance, we coordinated with a private nongovernment organization to provide counseling,” she said.

Ang, her younger brothers, lawyer Renato Paraiso and some aides distributed bags of groceries containing five kilos of rice, canned goods, biscuits, a pack of powdered coffee and noodles and P5,700 cash in brown envelope to the families.

On May 16, Kentex gave P13,000 each to the families of the deceased and the survivors.

Belando, who was renting a room in a boarding house as she and her youngest daughter wait for the remains of her son, said they weren’t blaming anyone and would accept any help from the family.

But she added, “It was not enough.”

Her son who was not married was financing her youngest daughter Jela’s education.

“He was a very sweet child. Each time he called he’d usually say ‘I’ve been saving money so when I come home we can celebrate,’” Belanda recalled.

“I haven’t seen him in three years. The last time I saw him was when his younger brother Sonny died,” she said. RC