In an interview with a local station on Thursday, Binay said Duterte was “qualified” to be the vice presidential bet of his party United Nationalist Alliance. 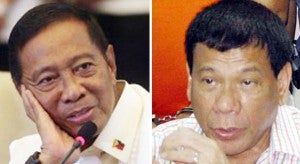 “[Duterte is] being considered. I don’t think he would be angry about it. He’s qualified. He’s a successful mayor,” Binay said.

Duterte, however, has announced he is not running for any position in 2016.

Speaking to the Inquirer by phone on Friday, Duterte said he had repeatedly announced he was not running because he could not afford to do so.

“I don’t have money and I don’t want to beg for money. This Vice President … I have to spend but I don’t have the money. I don’t like asking around for money, especially from other politicians because I don’t want to incur debt of gratitude,” he said, adding that he had been a politician and mayor of Davao City for years and there was no single instance he shopped around for campaign funds.

Duterte said he had been going around the country not to promote his potential candidacy for a higher post but to rally people to support federalism.

“I have been promoting federalism because there have been clashes due to BBL but I am not running. There was never an instance that I said I’m interested to be president or vice president,” the mayor said.

He added “only those who have resources should run.”

Binay, who has suffered blows from the Anti-Money Laundering Council report detailing the movement of the money which allegedly came from corruption he and his family have been accused of, has not yet picked a running mate for the presidential race.

He has been saying he will not withdraw from the race despite the string of corruption allegations thrown at him.

Binay is on a tour in Visayas and Mindanao this week, visiting the province of Davao del Norte and Davao City, which is Duterte’s stronghold.

Asked about the qualifications he was looking for in a running mate, he replied: “Someone who has the experience and if possible someone who can understand the economy so we can improve it.”

Accompanied by Valenzuela Rep. Sherwin Gatchalian in the tour, Binay also disclosed he had invited the congressman to join his senatorial lineup.

“He was a mayor before becoming a congressman,” Binay said referring to Gatchalian.

On Sen. Grace Poe’s rejection of his offer to be his running mate, however, Binay said he respected her decision.

Poe, who had emerged as a possible presidential candidate in the next year’s elections, said she did not see herself as the Vice President’s running mate.

Binay face mounting calls to explain the serious allegations of corruption against him, particularly the information on the 242 bank accounts and insurance policies which he, the members of his family and close allies allegedly own.

But Binay has kept dismissing the AMLC report as an attack led by his political rivals due to his determination to run for president in 2016.

“I have declared my presidential run too early that’s why I am at the receiving end of these lies and demolition jobs,” Binay said. With a report by Allan Nawal, Inquirer Mindanao