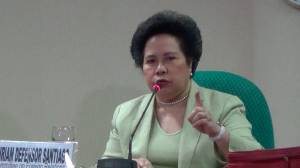 Amid public outrage over the fire that killed dozens in Valenzuela City, Sen. Miriam Defensor Santiago on Friday pushed for the approval of a bill that would make building owners criminally liable for failure to comply with fire safety laws.

“Disasters such as the one in Valenzuela are unacceptable when we have laws that are supposed to minimize fire hazards and rule out fire traps. The only explanation is that these laws are not feared. We should give them more teeth,” Santiago said in a statement.

At least 72 people were confirmed dead in a seven-hour fire that gutted a rubber slippers factory of Kentex Manufacturing Corp. in Valenzuela City on Wednesday. Police said some 26 people remained missing and 30 more were injured.

Santiago filed on December 2014 Senate Bill No. 2530, which sought to hold owners or lessors of residential or commercial building responsible for the death, injury, and/or loss of property resulting from fire.

Under the bill, owners or lessors may face life imprisonment if fire incidents in their residential or commercial buildings result in death. They will also be required to indemnify victims’ families P1 million each.

“Stringent punishment will command wider adherence to existing laws, and hopefully mitigate damage, injury, and death due to fire,” she said.

Santiago is also set to file a resolution on Monday calling for a Senate inquiry on alleged labor rights violations related to the fire. Some groups claimed that the workers of the Valenzuela factory were underpaid, without hazard pay and deprived of social security.

The senator has been on medical leave due to stage 4 lung cancer.