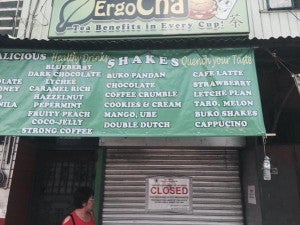 The owner of the milk tea shop in Manila where two people died, including her husband, after drinking an allegedly contaminated beverage last month is questioning the evidence cited by the police in the murder charge they filed against her son on Friday.

This developed as the Manila Police District (MPD) disclosed the results of toxicology tests showing that the two victims of the April 9 incident had ingested “oxalic acid,” a substance commonly used as a cleaning or bleaching agent.

A legal counsel for Adela Abrigo, the registered owner of ErgoCha milk tea shop in Sampaloc, said she was surprised that the MPD had “singled out” Lloyd Abrigo and did not press charges against the shop helper, Joseph Garnacio.

The MPD has filed charges for two counts of murder against Lloyd for the death of his father William and customer Suzanne Dagohoy. Lloyd is also facing frustrated murder charges for the case of Arnold Aydallah, Suzanne’s boyfriend, who also took a sip of the milk tea prepared by William but survived after receiving treatment at the hospital.

Who put the poison?

In an interview on Saturday, the Abrigos’ lawyer Benedicto Buenaventura said “we’ve only learned of this (case) now and we’re surprised. We expected the helper (Garnacio) to be included in the charge sheet. Why single out Lloyd in this case?”

Buenaventura said they had yet to receive a summons from the Manila prosecutor’s office.

“What evidence do they have in this case? The question here is who put the poison in the solution? Did the security camera footage show Lloyd actually putting the chemical in the milk tea solution? Why don’t they investigate the helper as well because he was at the shop all the time?” the lawyer said.

Buenaventura said they are now gathering evidence against Garnacio, who was last reported to have left for Cebu province after the incident.

The MPD director, Senior Supt. Rolando Nana, explained that Lloyd Abrigo was charged as the “sole suspect” based on a security camera footage obtained from the shop and witness’ testimony.

As to the results of the toxicology exams, Nana said “we only received the report [on Friday], which said that the victims died of a poisonous substance, specifically oxalic acid.”

The substance is commonly used as a cleaner or bleaching agent for clothes and for other household applications. According to the US-based National Institutes of Health, ingesting a significant amount of the acid can immediately cause abdominal pain, convulsions and shock.

All up to prosecutor

Nana said it would be up to the prosecutor to decide whether Lloyd’s case merits a trial.

But Buenaventura stressed: “From the very beginning, we have maintained that… he didn’t put any chemical in the milk tea solution and there is no evidence pointing to that as well. We will defend and prove his innocence.”

Investigators earlier said the footage showed Lloyd arriving at the shop the night before the incident and preparing a concoction. They also gathered from Garnacio that Lloyd allegedly brought a foul-smelling chemical that night.

After learning that his father fell ill the following day, Lloyd went back to the shop where he allegedly asked Garnacio to wash glasses and other utensils. Garnacio also claimed that Lloyd threw away a milk tea solution.

Lloyd and Adela Abrigo held a press conference on April 17, where the 23-year-old Lloyd denied any hand in his father and Dagohoy’s death. He maintained that he only brewed oolong tea at the shop the night before the incident. He did return to the shop upon learning what happened to his father, but Lloyd said he merely ran tap water on a pitcher and threw the wastewater outside the shop since the sink was then clogged.