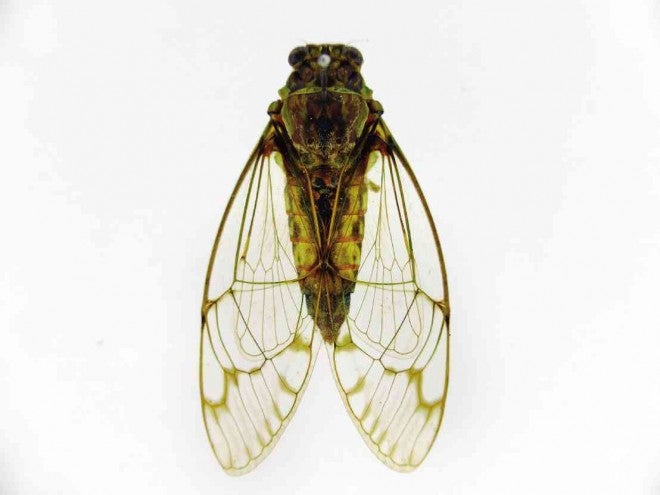 LOS BAÑOS, Laguna—When a team of scientists went up the enchanted Mt. Banahaw in 1998, they had been warned of mystical forest creatures.

Though no one had ever seen them before, the locals believed in these “little people,” whether dwarves or fairies, whose creepy giggles resound once the sun sets.

“True enough, we did hear it,”said Dr. Ireneo Lit Jr., a curator of the Museum of Natural History-University of the Philippines Los Baños (MNH-UPLB). “It sounded like ‘hihihi,’—very typical of the witches laughter we hear from movies,” he recalled.

Not one to be easily spooked, Lit followed the sound that led him to a tree on the mountain peak. There he found no dwarf or fairy but a tiny, noisy cicada, no more than an inch long, that seemed to be making fun of him.

Cicadas, popularly known in Filipino as “kuliglig,” are insects known for making a distinct sound. So far, only 15 species of this genus, Psithyristria, had been discovered and all of them from Luzon island.

The most recently discovered was the Psithyristria ridibunda sp. nov. or the “laughing cicada,” which produces a sound very similar to someone laughing.

Lit was able to collect three samples of the laughing cicada during a 1998 biodiversity documentation to Mt. Banahaw de Lucban, a part of the Mt. Banahaw range in Quezon province.

But he said he had to set aside the study for years after being appointed director of MNH.

In 2011 though, during a Manila forum of science experts from the California Academy of Sciences, Lit mentioned about the laughing creatures he had collected from Lucban town. The thought of an insect laughing caught the attention of the local and international media that reported it as one of the 300 new species discovered in the Philippines.

“I did not get the chance to correct (the reports) but at that time, it was still ‘unknown’ or has not been (scientifically) described,” Lit explained in a phone interview on Sunday. By this, he meant that no formal study has been completed to confirm that the laughing cicada was a newly discovered species.

It was only in 2014 that Lit finally found the chance to revisit his cicada specimen. He collaborated with cicada expert Dr. Young June Lee of the University of Connecticut for the description of the laughing cicada that eventually proved that it was new to science.

Lit and Lee published the science description on the New Zealand journal Zootaxa on April 21, 2015. MNH issued a statement regarding the publication on Friday.

Among the 15 species, the laughing cicada is closely similar to the Psithyristria incredibilis Lee & Hill, 2010, Lit said. It is also known for its unique “laughing” sound that its male produces to attract the female.

“That’s why there is this sexist joke among entomologists that the male cicadas are the luckiest (male species), because they have silent wives,” he quipped.

Lit said the discovery of the laughing cicada dispels myths about mountain elementals but opens a lot of new doors for science research.

These new species are also found only in the densest forests on mountain peaks and preserving their natural habitat is one sure way to keep these laughing creatures happy, he said.