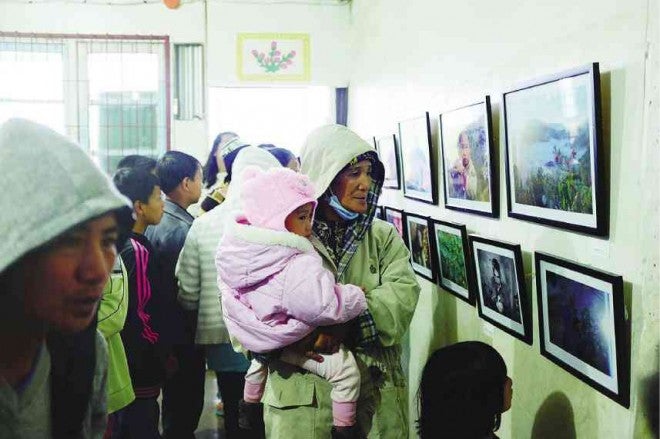 A group of photographers, writers, lawyers and other volunteers went up the Cordillera mountains one chilly Saturday morning on a special mission: To showcase the photographs taken by Kankana-ey kids to the community.

Months prior to the exhibit, volunteers of the nonprofit organization Juan Portrait (JP) packed their bags, donned their mountain gear and brought their digital cameras to Paktil Elementary School in Bauko, Mountain Province, to teach students basic photography.

Paktil is a three-hour drive from Baguio City and is accessible only by small vehicles. Residents are mainly Kankana-ey, a subgroup of the Igorot indigenous community.

The JP volunteers went to Paktil to teach the children to express themselves through photography and the arts. They also wanted to inspire creativity among the kids.

With the theme “The mountain is our playground,” the exhibit was the culminating activity of Community Frames, a JP project that aims to equip communities with the skills to pursue photography, either as a hobby or as a profession.

The project included two separate workshops conducted by volunteers for 22 elementary students in the villages of Paktil, Binaka and Sadsadan.

The group first visited in November. A follow-up was held in January. Each kid had a JP volunteer mentor.

“We taught them the basics of photography, such as composition, camera handling, framing and exposure,” said lawyer Christopher Linag, JP founder.

After laying the foundation, each kid was lent a camera (digital, DSLR and simple point-and-shoot) and left to explore their newly acquired photography skills to capture the different facets of life in the mountains, Linag said.

In March, a volunteer returned to the community to collect the cameras containing the children’s photographs and brought them to Manila for the selection process.

“The kids exceeded our expectations,” Linag said. “We spent long hours choosing photos for the exhibit. We really had a difficult time.”

The Community Frames exhibit was held in two classrooms of the elementary school. The young photographers, with their parents, schoolmates and other community members, saw the photos for the first time.

One photo that stood out was that of toy soldiers carefully assembled to depict a war scene. It was a huge contrast to other submissions that mostly showed portions of the community’s hilly terrain and the local flora and fauna.

The “war” photo, which was awarded first prize out of the Top 5 chosen from the exhibit, was taken by 11-year-old Edzzel Razo. 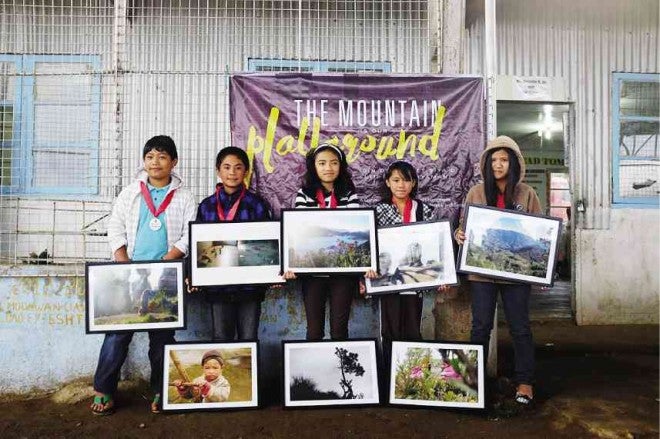 “I thought of using toy soldiers [as my subject] because the others were already taking photos of the surroundings,” Razo said in Filipino. “I wanted to show something different.”

An avid computer gamer, Razo said candidly that he joined the workshop to keep from being bored.

He said he learned two important things during the training: One, to take pictures using what is readily available in the immediate surroundings and, two, not to be discouraged by what other people say about one’s work.

He said that his first-place finish had inspired him to pursue the profession when he grew up.

Special awards were given to Hazel Cawayan (Best in Portrait), Arnolita Tindo (Best in Landscape) and Cesar Lawagey (Best in Animal Photography).

Before the exhibit, as JP members arranged the photo display, the other volunteers entertained the kids by engaging them in several activities.

On a bare wall of the school, JP volunteers painted a nagiginek (peace) mural with the help of some children. In another classroom, Miguel Abrera, also a high school teacher at MC, conducted a drawing workshop.

It was followed by another storytelling session. Wena Sanchez, a filmmaker and writer, read the book “Arroz Caldo ni Lolo Waldo” written by Becky Santos-Gerodias and illustrated by Bernadette Solina-Wolf. Other volunteers acted out the story as it was read.

JP donated to the school all the framed photos in the exhibit.

The morning after the awarding, the volunteers and some kid photographers trekked to the summit of Mt. Bandilaan. It was a thanksgiving climb for the successful run of Community Frames in Paktil.