Boxing icon Manny Pacquiao is still a hero in the eyes of the military despite losing to undefeated Floyd Mayweather Jr. in a unanimous decision on Sunday(Manila time) at the MGM Grand Garden Arena in Las Vegas. 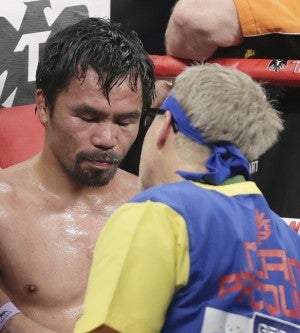 Manny Pacquiao, left, stands with trainer Freddie Roach at the finish of his welterweight title fight against Floyd Mayweather Jr. on Saturday, May 2, 2015 in Las Vegas. AP

“It’s unfortunate that he didn’t win but he made us all proud,” Armed Forces chief General Gregorio Catapang Jr. told reporters after the match.

Catapang watched with his mistahs or classmates from the Philippine Military Academy Class of 1981 at the AFP Commissioners Club.

Pacquiao is a reservist with a rank of Lieutenant Colonel in the Armed Forces. He is the Executive Officer of the 1st Sarangani Ready Reserve Battalion.

A free live viewing was shown at major military camps in the country, including at Camp Aguinaldo in Quezon City, the military’s main headquarters.

Soldiers, civilian employees and dependents at the Camp Aguinaldo cheered throughout the fight until the decision was announced.

Heavy rains also poured in Camp Aguinaldo during the second half of the match and spectators outside the grandstand ducked for cover. However, some chose to get soaked while watching.

“I think the decision was not fair because Manny said he thought all the while he was ahead of points. Both of them were careful but Manny was more aggressive, he was hitting Floyd,” Catapang said.

“Mayweather was always playing safe and was running away from his opponent,” he added.

Soldiers from the AFP Reserve Command said the boxing match was “lutong macau” or rigged.

The undefeated Mayweather who has unified the WBO, WBC, and WBA Welterweight titles Sunday, won via a unanimous decision 118-110, 116-112, 116-112, in the boxing showdown dubbed as the Fight of the Century.

The military is preparing a welcome ceremony for Pacquiao’s return. DPL