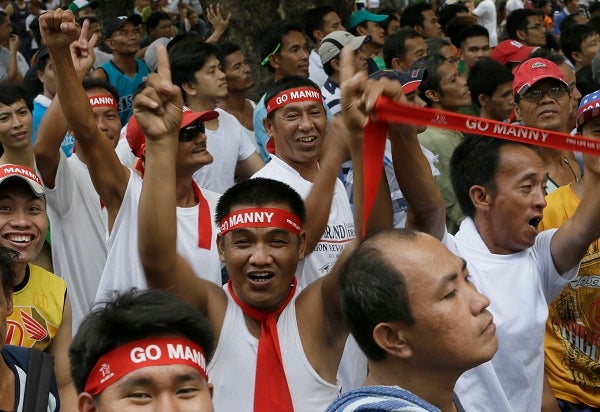 Filipinos, wearing red headbands, cheer as they wait for the round-by-round live satellite broadcast from Las Vegas of the welterweight boxing title fight between the Philippines’ Manny Pacquiao and American Floyd Mayweather Jr. Sunday, May 3, 2015 at suburban Marikina city east of Manila, Philippines. Pacquiao lost to Mayweather Jr., via a unanimous decision. AP

Manny Pacquiao once again proved that he could unite the country.

The Philippine National Police (PNP) said that no crime was committed in Metro Manila during the 12 rounds of the historic fight between “People’s champ”Manny Pacquiao and undefeated American boxer Floyd Mayweather Jr.

In a statement, the PNP said that no “untoward incident” happened in Metro Manila between 9 a.m and 3 p.m on Sunday.

However, two gun-related incidents, a carnapping and a stabbing incident happened in various parts of the country during the same period.

On the other hand, a certain Julia Isagon Dela Pena was hit by a stray bullet in Sta. Cruz, Laguna at the same time of the shooting incident in Batangas province.

Fish vendor Alejandro Catienza was stabbed by man who is known as “Carling” in Sitio Casantolan, Barangay Mercedes, Catbalogan City in Samar province at 9:40 a.m.

Pacquiao: I thought I won the fight