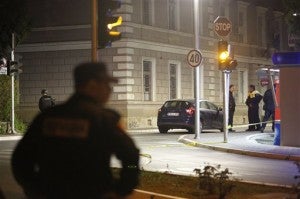 Police officers secure an area near to a police station in eastern Bosnian town of Zvornik, 200 Km (124 miles) east of Sarajevo, on Monday, April 27, 2015. Bosnian authorities say a man stormed into a police station in a northeastern town of Zvornik shouting “Allahu akbar,” killing a policeman and wounding two others, according to Police spokeswoman Aleksandra Simojlovic, who confirmed to The Associated Press that the attacker was killed. AP

SARAJEVO, Bosnia-Herzegovina — A gunman stormed into a police station in a northeastern Bosnian town shouting “Allahu akbar” on Monday, killing a policeman and wounding two others, authorities said.

The gunman was also killed during the attack in the town of Zvornik, police spokeswoman Aleksandra Simojlovic told The Associated Press. “Allahu Akbar” is the Arabic phrase for “God is great.”

Zvornik is a town in the Bosnian Serb part of the country and it is located on the border with Serbia. Before the 1992-95 war, about 60 percent of the town’s population was Muslim Bosnians. Almost all were expelled and many were killed during the war as part of a Serb campaign to create a purely Serb area.

Serbs managed to control half of Bosnia by the time the U.S. brokered a peace agreement in 1995 under which each warring party could keep their conquered territory. This is how the country ended up divided into two fairly autonomous regions — one for the Serbs, the other shared by Muslim Bosniaks and Croats.

The two have their own governments, but are linked by a central government based in Sarajevo.

After the war, only a few thousand Muslims returned to the Serb area of Zvornik.

Security Minister Dragan Mektic said the gunman stormed into the building with an automatic rifle and was killed in crossfire with police inside. He said Bosnia’s intelligence service had vague information about a potential terrorist attack three days ago, but that they didn’t know when or where it might occur.

The Bosnian Serb government will hold an overnight emergency session and the regional president, Milorad Dodik, told Bosnian Serb TV he believes the attacker was instructed by someone else even though he acted alone.

Lukac, the police chief, called on citizens to help police.

“We will fight against them and we will never forgive them, but police can’t do it alone. We need the citizens to help,” Lukac said, without specifying who he meant by “them.”

The imam of the Zvornik mosque, Mustafa Muharemovic, condemned the attack.

Read Next
Lacson: ‘I’d send corrupt friends to jail if I were president’
EDITORS' PICK
Infants bundled off; no one hurt in PGH fire
Tired of your Wi-Fi signal problems at home? Here’s a solution!
OPINION: Mischief Reef – where it all started
POVA x Mobile Legends Bang Bang: A partnership that’s built to win
CPA Australia and their designation: Advance your career
Fire-damaged PGH calls for donations
MOST READ
Leonen impeachment case moves forward in House
John Lloyd Cruz makes official showbiz comeback under Maja Salvador’s talent agency
Hot, humid weather for PH on Monday — Pagasa
Mischief Reef – where it all started
Don't miss out on the latest news and information.