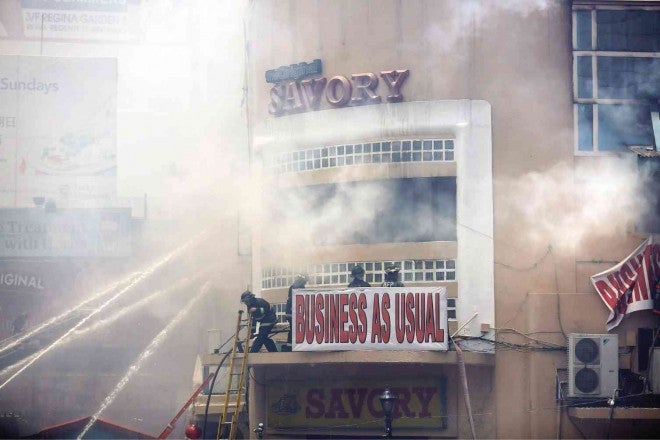 About P25-million worth of property and equipment were lost in the blaze that raced through the restaurant at the foot of Jones Bridge.

The three-story building, the pioneer Savory outlet put up in 1950, had burned down by the time firefighters announced the fire was under control at 1:59 p.m.

According to Manila Fire Marshall Jaime Ramirez, the blaze was first reported to them around 11 a.m. From then on, it was an uphill battle to save the 65-year-old structure and the other buildings surrounding it.

Less than an hour after it was reported, firefighters raised the Task Force Bravo alarm, which involves sending additional fire trucks from neighboring cities to help put out the blaze.

“We had difficulty extinguishing the fire because the thick smoke prevented us from aiming our hoses in the right direction,” Ramirez said.

“We also requested more trucks to help us contain the fire and prevent it from spreading to the buildings nearby,” he added.

Arson investigators have not yet determined how the fire started, but have focused their investigation on the restaurant’s kitchen.

Initial reports cited restaurant staff saying the blaze could have originated from an exhaust fan they failed to turn off.

“We want to determine exactly where the fire came from because the exhaust fans were placed at the base of the chimney. So something caught fire before it reached the fans and the chimney,” Ramirez said.

The Inquirer tried to contact the management of the restaurant, officially known as The Original Savory 1950, for a statement regarding the incident, but there was no response as of press time.

However, in posts on Twitter and Facebook as the blaze raged, the company rallied its customers to stay positive, using the hashtag #PrayForSavoryEscolta.

“Times of trouble are times of trust,” one update read. “Positivity through adversity. Thank you for all your prayers,” another update said.