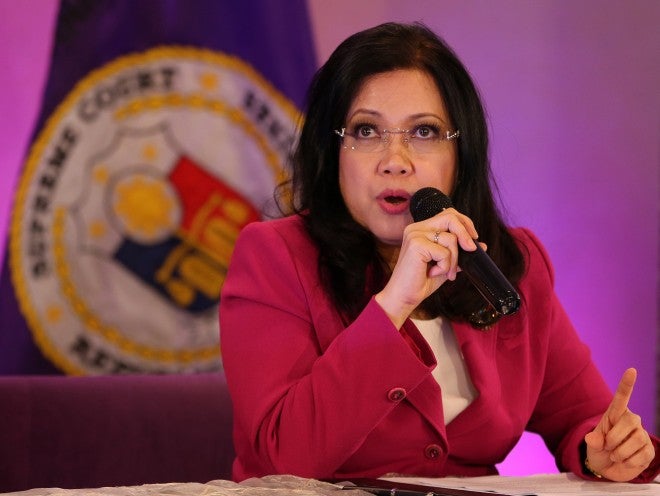 BAGUIO CITY, Philippines—Why should reelection effectively absolve an official from administrative liability? Or put another way, isn’t it about time that a doctrine that gives erring officials a clean slate once they are reelected be abandoned?

Chief Justice Maria Lourdes Sereno gave the lawyers of Makati City Mayor Junjun Binay a dressing down during the second round of oral arguments on Tuesday on the power of Ombudsman Conchita Carpio Morales to suspend the Makati mayor, scolding the Binay lawyers for insisting that an official, once reelected, may no longer be made to answer for administrative violations.

In a lengthy and heated exchange with Binay lawyer Sandra Marie Olaso-Coronel, an obviously incensed Sereno confronted her former law student with the possible implications of her argument that the doctrine of condonation covers the Makati mayor.

“This is the kind of legal regime you want us to propagate? We believe that this is wrong and you are telling us to continue along that doctrine?” Sereno told Coronel in an interpellation that lasted for more than an hour.

“You will insist on a rule of procedure that will wreak havoc on our constitutional framework?” Sereno said, as she reminded Coronel that as a professor at the University of the Philippines College of Law, she taught her students the virtue of honesty and integrity.

Sereno, a known advocate of clean governance and honest public service, considered the Binay camp’s position an affront to the Constitution and to future generations of Filipinos, and the kind of governance that jurisprudence would allow.

“It is the duty of this court to promote honesty and integrity in public service, because the Constitution is, first and foremost, our most important document and covenant that we must uphold,” she said.

“Because if we uphold your theory, we are basically going to say, with respect to all those laws, those offenses and those penalties, they cannot apply to reelected officials. That is what you’re asking us to do,” Sereno said.

The principle invoked by the Binay lawyers—which Sereno described as an “unfortunate doctrine … based on bad case law”—effectively extinguishes a reelected official’s administrative liability from alleged wrongdoing during a previous term.

The doctrine emanates from a 1959 case involving the mayor of San Jose, Nueva Ecija province, in which the Supreme Court ruled, based on American jurisprudence, that the mayor was to be effectively absolved from administrative charges by virtue of reelection.

Binay’s lawyers invoked the doctrine to challenge a March 11 order from the Ombudsman putting Binay under preventive suspension pending an investigation into his alleged involvement in the irregularities in the construction of the Makati parking building.

The Court of Appeals stopped Morales’ suspension order with a temporary restraining order on March 16, prompting the Ombudsman to raise to the high court her jurisdictional conflict with the appellate court.

Sereno was joined by Associate Justices Antonio Carpio and Estela Perlas-Bernabe in raising the possibility of reviewing the condonation doctrine.

The Chief Justice said the Ombudsman-Binay case that is before the court now was “a chance to make up.”

“So if we want to fight corruption, this court will have to make a strong stand for honesty and integrity,” she said.

Carpio said the 1959 doctrine was established under the guidance of the 1935 Constitution, suggesting that it may be outdated.

But Binay’s lawyers said the high court was barred from even reviewing this doctrine.

“The opportunity to revisit the doctrine of condonation will have to await a proper case filed before this court … when an error of judgment is alleged in an appeal,” Coronel said.

But Carpio said the power to condone is a constitutional power of the President.

“We should revisit it because the power to pardon in administrative cases is a constitutional power of the President, which we cannot usurp. So it’s a good ground to revisit that doctrine,” he said.

Carpio said the foundation of the doctrine was the 1935 Constitution, but the 1987 Constitution has become much stricter about public accountability.

He cited Article XI of the 1987 Constitution, which stipulates that “public officers and employees must, at all times, be accountable to the people, serve them with utmost responsibility, integrity, loyalty and efficiency; act with patriotism and justice, and lead modest lives.”

Carpio said this provision meant that “public officials can be accountable at all times,” even after the end of their service.

“The issue now is, ‘Can this court say to the people of Makati that we are granting [them] the power to pardon? Can we do that?” he asked.

The 1959 doctrine says the high court has done so, Carpio said, so “we should probably review it.”

The last to interpellate in the four-hour-long oral arguments on Tuesday, Sereno directed both the lawyers of Binay and the Ombudsman to “measure the condonation doctrine” against “the Filipino soul.”

Sereno showed a 63-page slide show, breaking down all the evidence that the Ombudsman has so far gathered against Binay, laws governing administrative liabilities of local government officials, and jurisprudence on administrative cases against local officials.

In her presentation, Sereno also cited the magnitude of public funds that local officials handle—P389.8 billion for disbursement this year and P341.5 billion in 2014—and the kind of impact that condonation would have if officials were allowed to get off easy by virtue of this doctrine.

“Do you imagine the magnitude of that money? That is nearly 20 times [the budget] of the entire judiciary,” she said.

“We’re talking about the magnitude of the problem we’re facing here. The social impact the message is saying is very important for the life of this country,” Sereno said.

“Why is Mayor Binay not here to face the highest court? The Ombudsman was here last week. Is there a reason he doesn’t care to appear?” Leonen asked lawyer Claro Certeza.

“It’s not a matter of him not caring,” replied Certeza.

“Is it not an indication of his interest also as to the results of this case? Or the respect for this court?” Leonen said.

“I’m definitely sure our client respects the court,” Certeza said.

The lawyer said he believed there was no order requiring the Makati mayor’s presence.

Morales appeared last week during the first round of oral arguments on her petition against Binay’s plea against his suspension before the Court of Appeals, even taking questions from justices.

Leonen also noted how ill-prepared Certeza was to tackle questions about the Ombudsman’s supplemental petition, which was filed on Monday last week to update the petition after the appellate court’s issuance of a writ of preliminary injunction, extending the temporary restraining order (TRO) it earlier issued.

“I’m sorry but I would have expected more from you having heard you speak in the media, seeming to be prepared to argue on all points,” Leonen told Certeza.

The magistrate also cited how Binay’s “refusal” to comply with the suspension order caused confusion in Makati City.

“Then it was your client that caused it all. No, not your client. It was your legal advice,” said Leonen, correcting himself.

Certeza disagreed and said: “We take exception, with due respect, your honor.”

These were Associate Justices Arturo Brion, Presbitero Velasco Jr. and Francis Jardeleza, who were all present during the oral arguments last week. The latter two even interpellated Acting Solicitor General Florin Hilbay who represented Morales.

The high court gave the two sides a nonextendable period of 30 days to file their memoranda on the case, their last chance to persuade the magistrates.