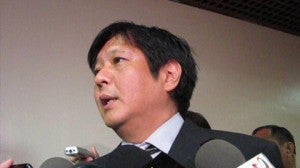 Marcos said the President should also summon the Chinese envoy in Manila to protest the reported China’s recent aggression and reclamation activities in the West Philippine Sea.

The senator said bringing the issue with other leaders of the Association of Southeast Asian Nations (Asean) in Kuala Lumpur, Malaysia, next week was just one option but the Philippine government should exercise all possible options.

“The President should summon the Chinese Ambassador to protest,” the senator said in a text message.

“Also he should initiate informal contacts with China and start discussing how to resolve the issue with an eye to formal talks to resolve the difference between the Philippines and China,” Marcos added.

Senator Aquilino “Koko” Pimentel III also called on the Philippine government to take advantage all available avenues to resolve the conflicts with China.

Pimentel, in an interview, said the Philippines may call on its allies or international community, make an appeal to China and look at the legal processes in international tribunals.

“We need to reassess our foreign policy position and national defense plans to make sure we are prepared for any contingency scenario. I filed a resolution a few weeks ago to this effect,” Trillanes said in a separate text message to reporters.