Binay: Next President should not be a newbie in gov’t | Inquirer News
Close
menu
search

Binay: Next President should not be a newbie in gov’t 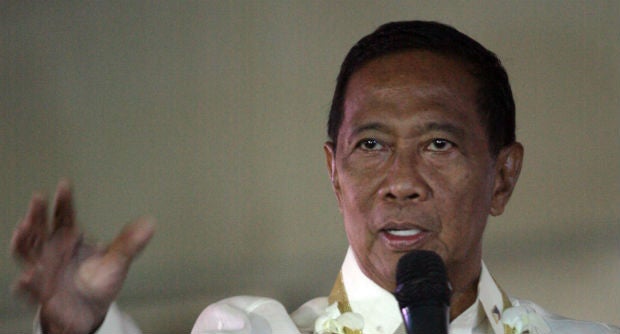 The next President of the Philippines should be an experienced leader, and not a newbie in government, Vice President Jejomar Binay said on Friday.

“Dahil sa paniniwalang ‘yan, gusto ko na kapag ako ay naging pangulo, pipiliin ko na maging katuwang ang mga Cabinet member na may karanasan at naging epektibo sa kanilang trabaho (Because of this belief, I will choose Cabinet members with experience and have been effective in their job if ever I get to be President),” he said.

Binay, a longtime mayor of Makati City before he was elected Vice President, also maintained that executives from the local government are better equipped to handle national positions because of their experience in managing their localities.

The Vice President issued the statement a day after the media reported a narrowed gap between him and neophyte Senator Grace Poe in the latest survey of the Social Weather Station (SWS) conducted in March.

Binay remained the voters’ top choice for president in 2016 based on the SWS survey with 36 percent, just five-percent point  away from  Poe, who ranked  second  in the poll with 31 percent.

The Vice President has publicly declared his intention to run for president in 2016 while Poe remained mum about her political plans.

Unfazed by the narrowed gap in the survey, Binay reiterated his desire to run for president, saying that competence and experience will be the key issues in 2016.

“Tatakbo ako sa pagkapangulo dahil alam ko na sa darating na halalan, pipiliin ng mamamayang Pilipino iyong may karanasan at kakayahan sa pamamahala – karanasan at kakayahan na nagdulot ng magandang resulta, katulad po ng tinatamasa ng mga taga-Makati (I will run for president because I know that the people will vote someone with experience and ability to govern–experience and ability that will bring good benefits to the people similar to those now enjoyed by the people of Makati),” he said.

Binay then enumerated what he has done when he was the city mayor and what he has been doing as Vice President and concurrent Presidential Adviser on Overseas Filipino Workers’ (OFW) Concerns and chairman of the Housing and Urban Development Coordinating Council (HUDCC).

He noted that when he was appointed as Makati mayor after the 1986 Edsa Revolution, he took over a municipality that had P190-million annual revenue and about P200-million debt. He said he instituted reforms, implemented fiscal discipline and sound management practices that helped transform a bankrupt Makati into the country’s premier city.

Under his leadership, Binay said, Makati provided free public education from elementary to high school and highly subsidized college education for residents at the University of Makati. Graduates were also assured of employment through the university’s dualized education system.

He said Makati also offered primary to tertiary health care under the Yellow Card health program – with free medicines and hospitalization – as well as a senior citizens’ care program that allowed Makati elderly to enjoy free movies, a birthday cake, medicine, and even cash allowance.

His accomplishments in Makati, Binay said, propelled him to be named as one of the top mayors of the world.

“Ang sabi nila wala raw akong magagawa. Pero naipakita ko naman po. Wala pong makapagsasabing hindi namin napaganda ang buhay sa Makati (They said I have done nothing. But I have shown that I have. No one can deny the improvement of life in Makati),” he pointed out.

As Presidential Adviser on Overseas Filipino Workers’ (OFW) Concerns, Binay said he prioritized the rights and welfare of OFWs, especially those on death row. As housing czar, he said, he led key shelter agencies into providing quality and affordable homes to low income and informal settler families (ISFs). AU