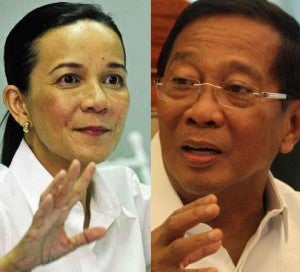 MANILA, Philippines–Closing in on Vice President Jejomar Binay as the voter’s choice for next President of the Philippines, Sen. Grace Poe said she was inspired by the people’s approval of her work.

Poe said she was humbled by the results of the latest Social Weather Stations (SWS) survey showing her almost catching up with Binay.

“I view it as a positive appreciation and validation by a good number of our countrymen of my work within and prior to the survey period,” said the neophyte senator.

“It inspires me that our people approve of what I have been doing and I will continue to do what I think is right and for the best interest of our countrymen,” she added.

Poe has been the subject of calls urging her to seek higher office. She said she would take these, among other factors, into consideration when she decides on her political plans.

In the latest SWS survey taken from March 20 to 23, Poe’s rating improved by 10 percentage points to 31 percent.

The previous survey, which gave her 21 percent, was in December.

The top rank still belonged to Binay, who got 36 percent in March, down one percentage point from December.

Binay is being accused of corruption and amassing ill-gotten wealth when he was mayor of Makati City and the Senate blue ribbon subcommittee is investigating the accusations.

Without any given list, the SWS asked 1,200 respondents nationwide to name up to three good leaders whom they believe should replace President Aquino when his six-year term ends in 2016.

The noncommissioned survey used face-to-face interviews and had a margin of error of plus-or-minus 3 percentage points for national percentages.

Despite a slight dip in his rating, Binay welcomed the results of the survey.

“The Vice President is truly grateful for the trust and recognition as shown by the results of the latest SWS presidential survey,” lawyer Rico Quicho, spokesman for Vice President Binay, said.

Asked if Poe was becoming a threat to Binay’s candidacy, Quicho said the Vice President would leave it to the people, who will be the final judge.

Commenting on Poe closing in on Binay, Speaker Feliciano Belmonte Jr. said it was too early to tell if this had changed the electoral landscape in 2016.

“Binay himself started with less than 5 [percent in the surveys], then came under the radar of the fight between Roxas and Sen. Loren Legarda,” he said in a text message.

“Now he’s in the eye of the storm,” added Belmonte, vice chair of the administration Liberal Party (LP).

Belmonte said his best advice for Poe was to run for vice president where she is way ahead of the pack.

Former North Cotabato Gov. Manny Piñol, a staunch advocate of the “Duterte for President” movement, said the results of the SWS survey were not surprising.

“We expected that because people have no other option. The Duterte fever is catching up with everybody,” Piñol told the Inquirer on the phone.

Piñol said the Davao City mayor was known for his anticorruption stance, “and Binay is being accused of corruption.”

“The mayor is also known for his anticriminality campaign, which Roxas doesn’t have,” Piñol added.

“Duterte is coming in at the right time,” he said.

But Piñol said the numbers could have been higher had it not been for Duterte’s “tentativeness” in declaring if he is running or not.

Admitting that the mayor “has his own mind,” Piñol said he wished Duterte would not say in interviews that he was not running. 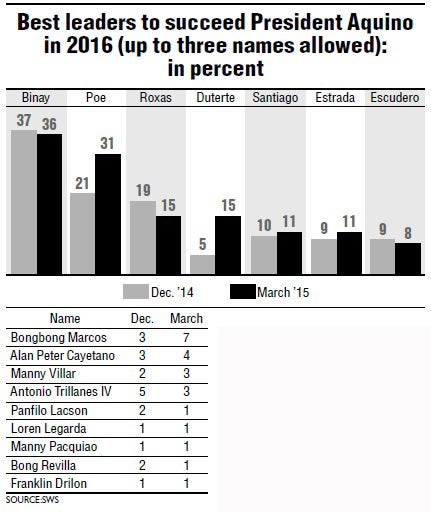 Some political leaders have not openly declared their support for a Duterte presidential candidacy “because they are not sure if he is running or not,” the former governor said.

Caloocan Rep. Edgar Erice, the LP’s political affairs chair, dismissed the significance of surveys this early in the game.

He said he still believed a Roxas-Poe tandem remained the best option, with the more popular senator giving way to the more experienced interior secretary.

“As early as last year I already said that the writing on the wall was clear: A Mar Roxas-Grace Poe tandem is the perfect team for our country that will provide continuity of good governance in the next 12 years and we will be the next economic miracle,” Erice said.

He said surveys “should be the least of our concern” at this point.

Erice said the only way to continue the country’s gains was to ensure that the next president had integrity, competence and experience.

“And as far as these criteria are concerned, no presidential wannabe could match Secretary Mar Roxas,” he said.

Iloilo Rep. Jerry Treñas, one of the movers of the LP Visayas bloc, said that Poe should “emulate” Manila Mayor Joseph Estrada who ranked highly in both the presidential and vice presidential surveys in the months before the 1992 elections.

Estrada decided to run for vice president and waited for another term to run for president, which he won by a landslide in 1998.

“I know I am biased because I am from the Liberal Party. But what Erap did is really ideal for her, especially since she is still young and new in governance,” said Treñas in a text message.

“There will still be major changes in the political landscape,” he said.

He said it was interesting that the Vice President’s rating was still declining, while Roxas was positioned relatively well.

“At this point, I think Mar’s on the right track not to peak too early. The major factors in 2016 will be the issues of corruption, performance and machinery down to the precinct level. And I think Mar has a major advantage on these factors,” he said.

“VP Binay will just concentrate his efforts on continuing his service to overseas Filipino workers and provide houses to the homeless and those living in danger zones.