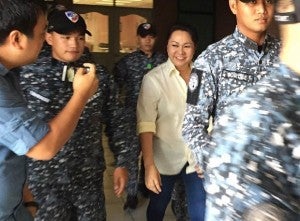 The lawyer of accused pork barrel scam mastermind Janet Lim-Napoles on Wednesday asked the Sandiganbayan if she could remain detained at Camp Bagong Diwa in Taguig City and defer her transfer to another detention after she was convicted to life imprisonment.

While Napoles still faces plunder and graft before the Sandiganbayan over her alleged involvement in the scam, she was declared by the Makati Regional Trial Court (RTC) guilty on Tuesday for the serious illegal detention of whistleblower Benhur Luy and faces a prison term of up to 40 years.

During her bail hearing, Napoles was unusually quiet, spaced out, and in fact sleepy compared to her demeanor in previous hearings when she was jolly, talkative and expressive as her former employees testified against her.

The Makati RTC ordered Napoles’ transfer to the Correctional Institution for Women in Mandaluyong.

Atty. Stephen David said in open court during Napoles’ bail hearing that if Napoles would be transferred, the antigraft court would have to conduct the bail proceedings at the Mandaluyong correctional.

David said Napoles’ request to remain in Bagong Diwa is “for the convenience of the court.”

The antigraft court Third Division said it will resolve on the request within the day due to the urgency of the motion.

Presiding Justice Amparo Cabotaje Tang said she could not recall an instance that the court conducted a hearing in the detention place of a convict.

She noted though that a Supreme Court circular requires that the hearings for a convict still facing charges should take place in the detention facility.

“We are ready to bear the inconveniences if that’s what the Supreme Court provides,” Tang said.

In August 2013, Luy accused Napoles, a cousin, and her brother of illegally detaining him at Bahay ni San Jose and at the South Garden Pacific Towers in Taguig City, a Catholic retreat house in Magallanes Village, Makati City, after they reportedly found out that Luy was having separate business transactions allegedly involving lawmakers’ Priority Development Assistance Funds (PDAF).

Napoles, meanwhile, claimed that Luy had volunteered to go on a three-month spiritual retreat and that he was not detained against his will.

Makati RTC Judge Elmo Alameda said in his decision that the prosecution was able to establish that Luy was illegally held captive for three months. IDL