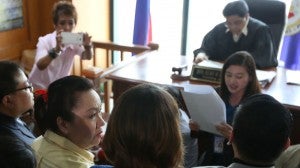 ONE DOWN, MORE TO GO Janet Lim-Napoles listens to the verdict by the Makati Regional Trial Court for the serious illegal detention of her former finance officer and confidant, Benhur Luy, in the first of several cases lodged against her which blew wide open her alleged criminal activities in the P10-billion pork barrel scam. NIÑO JESUS ORBETA

Benhur Luy sent this text message to the Inquirer after the Makati Regional Trial Court (RTC) on Tuesday found Janet Lim-Napoles and her brother Reynald “Jojo” Lim guilty of illegally detaining him and sentenced them to life imprisonment, or a jail term of up to 40 years.

In a 26-page decision, RTC Branch 150 Judge Elmo Alameda said Luy’s narration of events before and during his detention from Dec. 19, 2012, to March 22, 2013, when he was rescued by National Bureau of Investigation agents, was “credible and cohesive.”

The court also asked Napoles to pay P50,000 as an award of civil indemnity to Luy who “suffered anxiety and fright as a result of his detention” and another P50,000 for moral damages.

Senators Juan Ponce Enrile, Jinggoy Estrada and Ramon Revilla Jr. are detained for their alleged involvement in the PDAF scam.

Napoles, who came to the courtroom under heavy guard, held hands with her lawyer, Bruce Rivera, as the decision was read. At times she was seen conversing with her lawyer. She showed no emotion upon hearing the guilty verdict.

Rivera later told reporters that he “kind of expected” the decision.   “We weren’t surprised because we felt that this is not an ordinary case,” he said, noting that there was “public interest” involved. He said he planned to appeal the decision.

In August 2013, Luy accused Napoles, a cousin, and her brother of illegally detaining him at Bahay ni San Jose and at the South Garden Pacific Towers in Taguig City, a Catholic retreat house in Magallanes Village, Makati City, after they reportedly found out that Luy was having separate business transactions allegedly involving the PDAF.

Napoles claimed that Luy had volunteered to go on a three-month spiritual retreat and that he was not detained against his will.

Alameda said in his decision that the prosecution was able to establish that Luy was illegally held captive for three months.

“It is clear from Benhur’s testimony that the accused indeed threatened and intimidated him,” Alameda said.

She did not testify

Napoles did not testify during the nearly two-year trial, but only submitted a memorandum arguing that the only evidence or act where the prosecution established her participation in the crime was when she uttered, “Ikulong na ’yan, ikulong na ’yan (jail him).” This was on Dec. 19, 2012, when Napoles confronted him about his alleged PDAF transactions with lawmakers without her knowledge.

“The discourse of Janet in her memorandum cannot be given any evidentiary value because she did not testify. Her arguments were not established by direct testimony. Her failure to testify prevented the prosecution from examining her to test her credibility,” Alameda said.

The judge also said that while Luy was in detention, Napoles had “ample opportunity” to order his release but she never did.

“Clearly, she willingly agreed to be part of the conspiracy with her brother Jojo. Her inaction can be construed as assent to their evil deeds,” Alameda said.

“This is God’s justice. I am happy we have proven we were telling the truth, but on the other hand, I felt sad because Madame Janet is family. I am constantly praying for her and her family,” said Luy in his text message to the Inquirer.

Luy thanked his former counsel Levito Baligod, the Department of Justice prosecutors and the other employees of Napoles who testified against the businesswoman.

“Argabioso’s team believed me and stood up against the power and influence of Ms. Napoles then, I owe to them my gratitude,” Luy added. He added that Argabioso’s team surmounted pressure from powerful people.

Luy also mentioned the role of the media, particularly the Philippine Daily Inquirer.

“The PDI lent its credibility and I’m glad I did not fail them,” he said.

After the promulgation, Napoles was taken back to her detention facility at Camp Bagong Diwa in Taguig City. The clerk of court, Diosfa Valencia, said that there was still no order from Judge Alameda if Napoles would be transferred to a regular jail facility.

As for Lim, who remains at large, Valencia said that the case against him was ordered archived, meaning it will be reopened once Lim is arrested and the court gains jurisdiction over him.