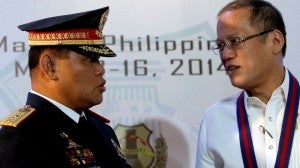 MANILA, Philippines – The Volunteers Against Crime and Corruption said on Sunday it had created a legal team to study the possibility of filing multiple murder cases against President Aquino, resigned Philippine National Police chief Alan Purisima and former PNP-Special Action Force head Getulio Napeñas and others in connection with the Mamasapano encounter.

“Justice demands that our leaders be made accountable for their illegal and questionable actions,” VACC founding chair and president Dante Jimenez said in a statement.

He said tested lawyers have been tapped for the legal team from the VACC, but he did not name them.

Jimenez said the team would take into account the reports made by the Senate and the PNP Board of Inquiry and analyze whether there was a conspiracy to implement the police operation in Mamasapano, Maguindanao, and to “keep it secret by unceremoniously breaking the chain of command [that resulted] in the operation [going] awry.”

The case against the President, should the legal team file one, would be lodged after his exit from Malacañang at the end of his term on June 30, 2016, when his immunity from suit would also expire, Jimenez said.

Both Aquino and Purisima denied any wrongdoing in connection with the massacre, blaming Napeñas for failing to inform Interior Secretary Mar Roxas and acting PNP Director-General Leonardo Espina and for failing to coordinate with the military.

Jimenez, however, scored Aquino for insisting that he could not be made liable through command responsibility.

“Should we just sit down again and turn a blind eye? An error or two may be tolerable, but a string of bungled decisions by the President, resulting in so many lives lost, demands justice and accountability. The President should be made to pay for his un-remorseful and mindless tinkering with precious human lives,” Jimenez said.

The special team of the Department of Justice-National Prosecution Service and National Bureau of Investigation is set to release this week its own report on the encounter and is expected to recommend charges against violations committed by officials. SFM/AC