DAVAO CITY, Philippines – Maguindanao Governor Esmael Mangudadatu said some members of the Ampatuan clan who were included in the new list of accused in the 2009 massacre of 58 people should shut up and instead face the charges filed against them.

But Mangudadatu denied Reshal’s allegations, saying government prosecutors, not him, filed the new charges in connection with the massacre.

Early this year, Reshal was replaced as mayor as she had not been reporting for work because she had been facing another case — that of the killing of her uncle Abdullah Ampatuan in July 2013. Judge George Sabido of the Regional Trial Court Branch 16 based in Cotabato City has issued an arrest warrant against Reshal. 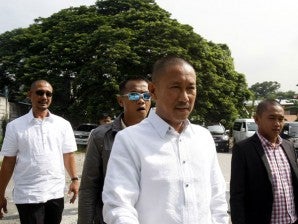 Mangudadatu said he had nothing to do with the filing of the case, in connection with the killing of Abdullah Ampatuan, against Reshal.

“This is what I’ve been telling them, that if they are angry at somebody, they should not kill but instead talk to them,” the governor said.

But Mangudadatu said he had no power over Sabido and Ronda.

“These are independent people. How can I have control over them? They were just acting on cases filed against the Ampatuans,” he said.

In earlier interviews, Mangudadatu described Zahara as among the “good Ampatuans” as she was “friendly” to the governor. Zahara, also in an interview two years ago, told the Philippine Daily Inquirer that she did not have a problem with the governor, whom she considered a friend.

Zahara has been in hiding since last year following the issuance of a warrant for her arrest in connection with the killing of former Sangguniang Bayan secretary Alfredo Amelista in April 2014.

Mangudadatu also denied being behind the filing of a case against Zahara.

In a separate interview, Archie Amelista, son of Alfredo, said he was the one who filed the case against Zahara.

“The victim was our father, we didn’t need the governor for us to file a case against the suspects,” Amelista told the Philippine Daily Inquirer in an interview.

Amelista, a policeman, said he witnessed the killing of his father just outside their residence in Shariff Aguak on April 3, 2014.
“I saw the killers. I even threw stones at them while they were shooting my father,” he said.

He identified the suspects as Kanurin Tayuan and Rambo Guiasalim alias London, whom he said were Zahara’s men.

“There’s no need to investigate because we know the suspects are Zahara’s loyalists,” he said.

Another witness claimed seeing Tayuan and Guiasalim talking to Zahara at the municipal hall before the killing happened.

Zahara, in her counter-affidavit, denied the allegation.

For Mangudadatu, what is more interesting is that the suspects and victims in the cases are members of the Ampatuan clan.

Amelista has confirmed to the Inquirer that his mother, Bai Puti, is a sister of the Ampatuan patriarch — Andal Sr..

“Zahara’s husband, Anwar, is a first cousin,” he said.

“That’s why it took us three months before we finally filed the case against Zahara. We waited for them to come and talk to us, but they never did,” Amelista said.

Reshal was also accused of being behind the killing of her uncle Abdullah Ampatuan.

“So why blame me?” Mangudadatu asked.

Reshal and Zahara were also among those included in the additional list of suspects in the Maguindanao massacre that left 58 people dead, including Mangudadatu’s wife, sister, relatives and supporters. The victims, which also included 38 media workers, were on their way to Shariff Aguak town to file the certificate of candidacy of Mangudadatu, then vice mayor of Buluan town. The group’s convoy of vehicles were blocked by armed men allegedly led by Andal Jr., and were brought to an interior village in Ampatuan town where the massacre happened.

But Mangudadatu said some of those in the new list of suspects, like former Maguindanao board member Jainodin Abutazil, were his political allies.

“I was surprised to learn that they were allegedly involved in the massacre. I just told them to clear their names in court,” Mangudadatu said.

Also included in the list was Cotabato City administrator Cynthia Sayadi, who was solicitor general of the Autonomous Region in Muslim Mindanao during the term of Zaldy Ampatuan, one of the prime suspects in the massacre.

Sayadi earlier dared the governor to swear with her before the Qur’an (the Muslims’ Holy Book). Mangudadatu, on the other hand, challenged Sayadi and all those who accused him of political machination, to go to Mecca and perform yamin (oath).

“I will swear at Baitullah (House of Allah) that I did not accuse any of 50 new suspects and that if am guilty of falsehood, I would implore that all my good deeds including 13 hajj performances be eroded and that I die right there if I did,” Mangudadatu said.

The governor said it is not fair that he be blamed for all the charges filed against those allegedly involved in the massacre.

“I’m just one of those whose loved ones died in the massacre,” he said.