74 NGOs yet uncharged in pork scam—Baligod 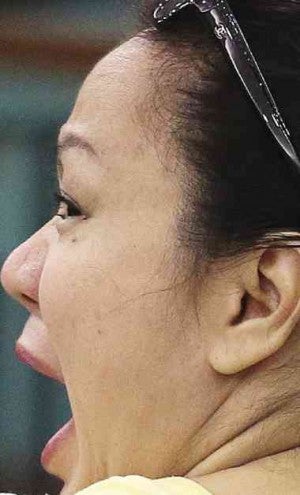 WHEELER-DEALER. Janet Lim-Napoles, accused mastermind of the pork barrel scam, yawns during a hearing on her bail petition at the Sandiganbayan. RAFFY LERMA

LA TRINIDAD, Benguet—More than 70 nongovernment organizations (NGO) linked to the pork barrel scam have not been indicted, a development that does not sit well with the former lawyer of whistle-blower Benhur Luy.

Lawyer Levi Baligod told an antigraft forum here on Thursday that he may file complaints against 74 of the 82 NGOs linked to the scam allegedly perpetrated by detained wheeler-dealer Janet Lim-Napoles.

Only eight NGOs directly connected to Napoles were charged, Baligod said. He said two years would have been enough time to gather evidence and investigate the charges against the other 74 NGOs, along with several senators and congressmen implicated in the scam.

Senators Juan Ponce Enrile, Jinggoy Estrada and Ramon “Bong” Revilla Jr. have been detained as they face trial for allegedly funneling their Priority Development Assistance Fund (PDAF) to ghost projects through the 82 NGOs in exchange for kickbacks.

“Maybe the [Department of Justice] is [addressing] more important matters at the moment [that is why] it has been sidetracked from the pork barrel scam. But as responsible citizens, we should step up and pursue the cases until [these lawsuits are] finished,” he said.

He said about P2.9 billion, coursed through the National Agribusiness Corp., and P5.4 billion funneled through the Technology Resource Center, went to the 74 NGOs.

He said the 74 NGOs have no direct ties to Napoles. “The pork barrel scam is not just about Napoles. There are other Napoles-like businessmen. We have identified four of them who did just what Napoles did,” he said.

Baligod said these NGOs also received funds that passed through the National Livelihood Development Corp. He did not disclose the amount involved.

He said the NGOs are facing charges of malversation of public funds.

Baligod said he worries that if he filed the charges in DOJ, the department would not have time since its hands are still full and is still handling a third batch of pork related cases.

“The Office of the Ombudsman has not yet resolved the complaints against 47 lawmakers involved in the scam,” he said.

An option that Baligod sees is to file complaints in the Senate blue ribbon committee, which has the power to summon the officers of these NGOs to an inquiry. The Senate can submit its findings to the Ombudsman.

Baligod also said the government did not dissolve the pork barrel, even after Congress voted to discontinue the PDAF.

“The present budget system retained the most important feature of the pork barrel [which grants] lawmakers the sole discretion on how to spend public funds,” he said.

The only solution is for Congress to approve a 10-year development plan, for which allocations would be made and executed by the executive branch no matter who sits as president, he said. Kimberlie Quitasol, Inquirer Northern Luzon