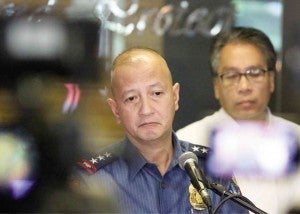 The National Police Commission (Napolcom) has authorized Philippine National Police officer in charge Deputy Director General Leonardo Espina to sign supply contracts for the procurement of firearms, ammunition and other weapons for the 150,000-member force.

Napolcom Resolution 2015-106 allows Espina to “approve and issue permits to import/transport ammunitions, explosives, firearms of any type/caliber, weapon systems and accessories attached or pertaining to air, naval and land assets.”

According to Eduardo Escueta, Napolcom vice chair and executive officer, the resolution was issued to hasten the PNP’s acquisition of service firearms, explosives, ammunition and other weapons systems for its personnel.

He said these include the procurement approved by the PNP Firearms and Explosives Office and those made by the Armed Forces.

“The Napolcom resolutions were issued to authorize Espina to act on or approve urgent, necessary or time-bound disbursements, transactions (and) activities which, unless addressed immediately, may unduly cause damage and prejudice the public or hamper the effective performance of the functions of the PNP,” Escueta said in a statement.

The commission earlier passed a resolution granting authority to Espina to approve procurement contracts and disbursements of “legitimate/regular financial transactions” of the PNP.

Espina, who succeeded resigned PNP Director General Alan Purisima but only in an acting capacity, was also allowed to release funds from the PNP’s Agency Reserved Fund, allocate funds from its Trust Receipts and sign checks in behalf of the PNP.

In addition, he was given the authority to approve payroll and disbursement vouchers for the PNP’s uniformed and nonuniformed personnel.

He was given also the green light to impose disciplinary actions on erring PNP personnel, appoint officers with salary grade 24 and below to various PNP posts as officer in charge and approve the release of benefits for retired policemen.

Espina was also allowed to “enter into or renew agreements concerning regular transactions of the PNP and issue firearms licenses and permits pursuant to the Comprehensive Firearms and Ammunition Regulation Act.”