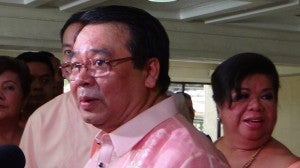 A party-list lawmaker will challenge the 27-centavo per kilowatt hour increase in electricity rates in the franchise area of the Manila Electric Co. (Meralco) this month.

“The ERC it appears will just take this sitting down, as it did in the past, since up till now it has yet to release the long awaited collusion report on the 2013 Malampaya turnaround,” he said in a statement.

The Meralco rate increase will mean that, for a typical household consuming 200 kWh, the overall electricity rate will increase to about P10.68 per kWh in April, against the P10.41 per kWh the previous March.

An increase in power rates had been anticipated as gas-fired power plants turned to alternative fuels for the 30-day maintenance shutdown of the Malampaya gas platform off Palawan until April 14.

The rates of the independent power producers also went up by 17 centavos per kWh.