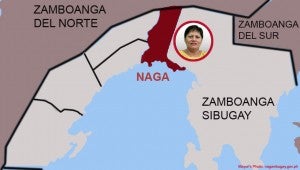 ZAMBOANGA CITY, Philippines – The kidnapping group that snatched Mayor Gemma Adana on Monday is only waiting for the right time to spirit her out to Sulu or Basilan and turn her over to the Abu Sayyaf, local officials warned.

Zamboanga Sibugay Gov. Wilter Palma said he already ordered the police and the military “not to bring down their guard because the kidnappers are just waiting for the opportunity.”

“If the police and military tire in running after them, the kidnappers would take the advantage of that chance to bring the captive outside Sibugay,” Palma said.

He refused to say how the police came to that conclusion but agreed that the Waning Abdusalam Group (WAG) was trying to take her to Basilan or Sulu to be turned over to the Abu Sayyaf.

Gucela cited the case of another victim of the group, the 73-year old Korean national Hong Nwi Seong.

Seong, who was abducted in RT Lim town on January 24, had been reportedly handed over to an Abu Sayyaf faction in Sulu.

Palma said the WAG could also be thinking of bringing two other kidnap victims – teachers Bernadeth Silvano and Russel Bagonoc – out of the province and hand them to the Abu Sayyaf.

Silvano and Bagonoc were kidnapped from Talusan town on March 5 and their kidnappers wanted P10 million in exchange for their freedom.

Gucela said the Abu Sayyaf had been using the WAG, which he described as “the only notorious (kidnap) group operating in Sibugay,” to make money.

“(The group) usually brings out its captives to Sulu or Basilan,” Gucela added.

Palma, meanwhile, urged the police to review the security plan for local government officials in the province.

But police authorities said Adana became vulnerable when she dismissed her lone close-in escort for a break on April 6.