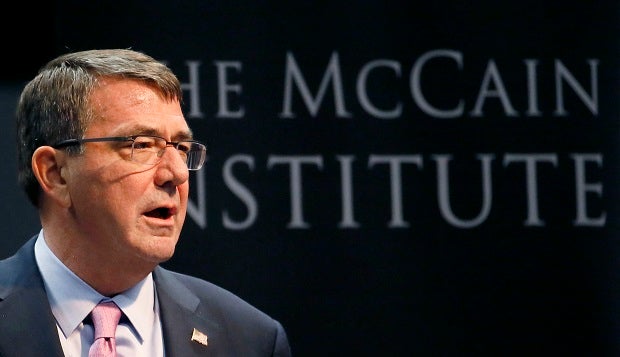 U.S. Secretary of Defense Ash Carter speaks, Monday, April 6, 2015, at the McCain Institute at Arizona State University in Tempe, Arizona. The Obama administration is opening a new phase of its strategic “rebalance” toward Asia and the Pacific by investing in high-end weapons such as a new long-range stealth bomber, refreshing its defense alliance with Japan and expanding trade partnerships, Carter said Monday. AP

TEMPE, Arizona, United States — The Obama administration is opening a new phase of its strategic “rebalance” toward Asia and the Pacific by investing in high-end weapons such as a new long-range stealth bomber, refreshing its defense alliance with Japan and expanding trade partnerships, Defense Secretary Ash Carter said Monday.

“I am personally committed to overseeing the next phase of the rebalance, which will deepen and diversify our engagement in the region,” Carter said in a speech outlining the administration’s rationale for trying to devote more attention to Asia.

At a time of increasing conflict and uncertainty across the Middle East, as well as growing concern about Russian intervention in Ukraine, Carter’s remarks seemed designed to convince Americans, and perhaps more importantly, the country’s Asian allies, of the American commitment to the so-called Asia pivot.

His speech at Arizona State University’s McCain Institute touched on themes he expects to raise on a week-long trip to Asia, his first since becoming Pentagon chief in February. He will visit Japan and South Korea for meetings with top government officials and also spend time with U.S. troops.

Carter urged Congress to give President Barack Obama authority to complete a free trade agreement known as the Trans-Pacific Partnership, a 12-nation accord that Carter said holds “enormous promise” for jobs and economic growth in the United States. He said it is expected to increase U.S. exports by $123.5 billion in the next decade.

He called the Trans-Pacific Partnership, or TPP, one of the most important parts of the administration’s effort to shift more attention to Asia and the Pacific after more than a decade of focusing on the wars in Iraq and Afghanistan. He said TPP is as important to him as a new aircraft carrier.

He described the Asia-Pacific trade arrangement as an urgent priority. “Time is running out,” he said, as countries in the region forge their own trade agreements without the U.S.

The Obama administration is not the first to tout the importance of building stronger relationships in Asia; the George W. Bush administration made similar arguments while expressing the same concerns about the implications of China’s rapid military modernization.

Yet Bush launched the Iraq and Afghanistan wars that would consume his administration and limit his options in Asia. Obama came into office committed to ending the wars, but the rise of the Islamic State group in Syria and Iraq, as well as the collapse of Yemen, has raised new obstacles.

BACKSTORY: Mideast problems hamper US security pivot to Asia
Carter, who advocated strongly for shifting more U.S. attention to Asia when he served as the deputy secretary of defense in 2011-2013, said in his Arizona State speech that the Asia-Pacific is “the defining region for our nation’s future.” He rattled off numerous statistics meant to highlight the importance of Asia to America’s future, including what he called an expectation that half of the world’s population will live there by 2050.

Carter, who is expected to visit China later this year, said the U.S. is deeply concerned about some aspects of Beijing’s increasingly assertive approach, and he said the central strategic challenge of today’s generation of Americans is to assure peace and prosperity across the Asia-Pacific “as China continues to rise.”

He dismissed the prediction by some that China will attain predominance over the U.S. in the Asia-Pacific or that its economic growth will squeeze out opportunities for younger Americans. He asserted that the U.S. and its Asian allies have spent more than $16 trillion on defense since the end of the Cold War in 1990, which he said is about 10 times more than the next highest spending country, China.

“I reject the zero-sum thinking that China’s gain is our loss because there is another scenario in which everyone wins, and it is a continuation of the decades of peace and stability anchored by a strong American role in which all Asia-Pacific countries continue to rise and prosper,” he said.