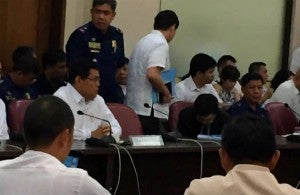 The House of Representatives on Tuesday resumed its probe on the Mamasapano incident, this time attended by family members of the slain 44 Special Action Force (SAF) commandos.

The probe resumed almost two months after the first hearing on Feb. 11 which was described as a circus after outraged lawmakers tried to upstage one another in an emotional debate.

House leaders suspended the hearings pending the results of investigations by the police and the Senate on the operation to take down international terrorist Zulkifli bin Hir, alias Marwan, bomb-maker Abdul Basit Usman and another suspect.

The family members of the slain SAF commandos attended the hearing as part of the audience.

In his opening speech, public order and safety panel chair Negros Occidental Representative Jeffrey Ferrer appealed to his colleagues to restrain their emotions to avoid a repeat of the previous hearing.

“We are accused of grandstanding and non-conduct. I would like to appeal for your cooperation in order to change the negative impression on the public,” Ferrer said.

He reminded them to avoid questioning their own rules of procedure and keep their questions within their five-minute allocation.

“Our first hearing fell short of people’s expectations when we allowed our unbridled passion to get in the way of our decorum. Let’s not allow this to happen again,” Salliman said.

The House is clamping down on emotional lawmakers to maintain decorum in the investigation after its first hearing was criticized for being frenzied and circus-like.

Members of the joint House panel conducting the probe voted not to invite President Benigno Aquino III, who has drawn flak for refusing to accept responsibility for the botched operation while blaming Napeñas.

The police Board of Inquiry in its report found that Aquino bypassed the police chain of command when he authorized Napeñas and then-suspended police chief Alan Purisima to lead the operation while keeping acting police chief Leonardo Espina in the dark.

Meanwhile, the Senate panel led by Senator Grace Poe found Aquino “ultimately responsible” because of his giving assent to Purisima, his long-time friend.