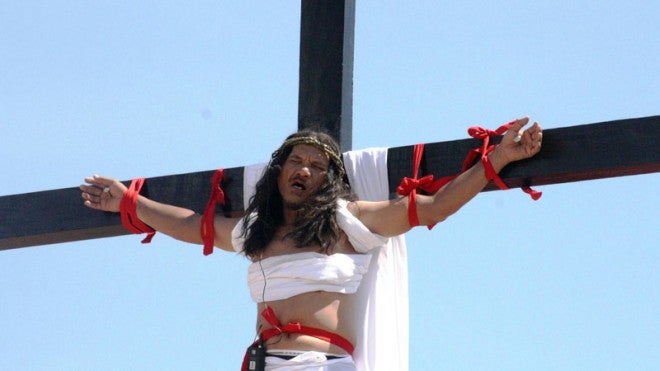 NOSUCCESSION PLAN Ruben Enaje will be nailed to the cross for the 29th time on Good Friday as a
form of penitence as his barangay has difficulty finding a replacement because “council has prioritized
character over succession rules.” E.I. REYMOND T. OREJAS/CONTRIBUTOR

CITY OF SAN FERNANDO—Ten men had themselves crucified on Good Friday in three villages in this Pampanga capital.

Councilor Harvey Quiwa, chair of the Maleldo (Holy Week) committee, said no foreigner took part in the reenactment of the crucifixion of Jesus Christ. The committee banned the participation of foreigners, citing public order.

This was the first time that only five penitents took to the cross in Cutud where crucifixion, as a Good Friday sacrifice, was started in 1962 by faith healer Artemio Anoza.

READ: No successor: Crucifixion man must do it for 29th time

In the nearby village of Sta. Lucia, Fernando Mamangun, 45; Danilo Ramos, 44, and Melcohor Montoya, 60, joined the rite.

In the next village of San Juan, Alex Laranang and Wilfredo Salvador were the only ones who had themselves nailed to the cross.

No accidents happened as the nails were properly driven on hands and feet by men playing to be centurions for decades now, Quiwa said. RA

Good Friday: Why did God have to die on the cross?

For some devotees, self-flagellation their own passion, penance, prayer

In photos: Self-flagellation on Good Friday