Man and grandmother electrocuted to death in Sabah | Inquirer News

Man and grandmother electrocuted to death in Sabah 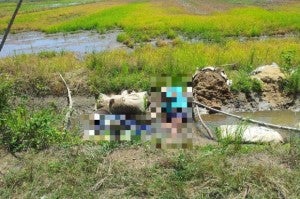 The remains of the man and grandmother after being electrocuted in the drain in Sabah.

KOTA KINABALU–A man and his 70-year-old grandmother died holding hands after they were electrocuted in Sabah’s western Kota Belud district.

The 25-year-old man, Awang Mohd Rajib Abd Nazim, was said to have gone to his grandmother’s aid when she fell into a wire-laden drain and was also electrocuted as he held her hand at about 10.30am Thursday.

A villager of Kg. Tawadakan, some 85km from the state capital, where the incident occurred said that the duo were heading to their farm when it happened.

State Fire and Rescue Department public relation officer Mohd Affendy K Ramin said initial investigations indicated that the grandmother had slipped and fell into the drain before she was electrocuted by a loose wire inside.

Affendy said the incident was being investigated while a post mortem on the bodies was being carried out at the Kota Belud Hospital.