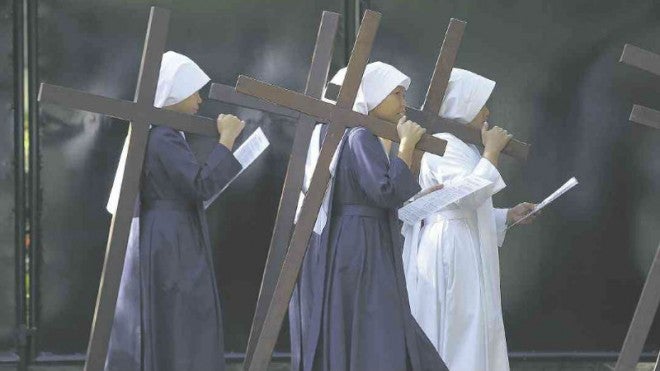 NUNS AND CROSSES Nuns carry wooden crosses as they make the Stations of the Cross at the Philippine Center of St. Pio of Pietrelcina in Quezon City. AP

Why do Jesus and his disciples seem to have only bread and wine in the Last Supper stories in the gospels?

For Pampanga Auxiliary Bishop Pablo Virgilio David, answering the question may need more than biblical exegesis. According to him, it also requires imagination.

“Imagination allows us to read the lines and supply the gaps between the lines,” said David, a biblical scholar.

He calls the use of imagination in interpreting Scripture interpolative reading or “personal hermeneutical method.”

The method calls for the reader to have a feel of the text, including the emotion, the tension and the interpersonal dynamics.

To answer the question on why Jesus and the disciples seemed to have only bread and wine, one should first go to the gospel texts.

The story, according to Mark, Matthew and Luke, says it was a literal Passover meal (one that actually took place).

David said, “I’d expect there to be a roasted lamb at table. If there was, it would make more sense for Jesus to have taken a piece of lamb meat instead and said, ‘Take and eat, this is my body.’ But he said those words over the bread instead.”

He said that many believers would probably say Jesus is the lamb.

“This is true in the symbolic, figurative or theological sense. But if the detail about the meal as a Passover is factual, then there should be a lamb,” he said.

Here is David’s take on using imagination to make sense of the missing lamb: “When Jesus said, ‘One of you will betray me,’ he probably did not even have an inkling who it was that would do it. He said, ‘The one I give the bread to, that’s him.’ In John’s Gospel, Jesus takes a morsel of bread, dips it in a dish and gives it to Judas. Then he says to him, ‘What you are going to do, do quickly.’

“The disciples understood that to mean Jesus was instructing Judas (as treasurer) to get the things they needed for Passover, among them, of course, the roasted lamb. They probably had preordered the roasted lamb from a litsunan (rotisserie) and expected Judas to pay for it, pick it up freshly roasted, and bring it for the Passover meal in the upper room.

“But he went out and never came back because he had gone to the chief priest to get his 30 pieces of silver.

“Meanwhile, Jesus and the disciples waited and wondered what had happened to the lamb, and if Judas was going to show up at all. It was in the midst of that delay that it dawned on Jesus what was going on. It was then that he knew that something had gone wrong: There was going to be no lamb because Judas was not coming back anymore.

“It was then that he took bread instead and said the famous words of consecration, ‘Take and eat, this is my body.’ It was his way of saying, ‘You’re looking for the lamb? Here I am, I am the lamb. I’ll give up my life for you.’ Only then will the switch from the literal to the theological or figurative lamb take place. He turns a meal of betrayal into a meal of forgiveness.”