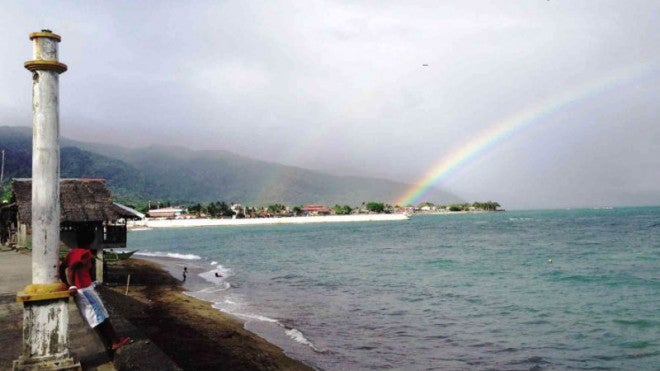 TWIN RAINBOWS BEFORE THE STORM A few days before Typhoon “Chedeng” (international name: Maysak) makes its presence felt, two rainbows appear in Virac, the capital town of Catanduanes, known as the “Land of the Howling Winds” for the frequent strong typhoons that hit the island province. FERNAN GIANAN/INQUIRER SOUTHERN LUZON

Keeping foreign and Filipino tourists safe as they travel to the provinces for the weekend when Typhoon “Chedeng” (international name: Maysak) makes landfall in Luzon is the biggest challenge for authorities, the National Disaster Risk Reduction and Management Council (NDRRMC) said on Wednesday.

“The challenge is that many of our people are going home in the [Lenten] holiday mode. They might not see the advisory and warning,” NDRRMC Executive Director Alexander Pama said.

President Benigno Aquino III showed full trust and confidence in his lieutenants tasked with disaster management, saying that his only latest reminder to them was to be “thoroughly prepared” for Chedeng once it enters the Philippine area of responsibility.

The President said that Science Secretary Mario Montejo had advised him “there was no need to call for a bigger meeting” than what was usually handled by the NDRRMC.

Mr. Aquino also expressed confidence that every department, such as the Department of Public Works and Highways, Transportation and Social Welfare and Development, were prepared for Chedeng’s possible onslaught.

The President also heaped praises on the former Navy chief.

“In the person of Alex Pama, our former FOIC (Flag Officer in Command), he is a self-starter. You don’t have to tell him what to do. So I’m sure he already has the answers to my questions that I am still formulating,” Mr. Aquino said.

The President said that Pama was a “very proactive guy (who) has proven himself in the series of typhoons that have come since he has been appointed NDRRMC chief,” adding that the former FOIC had also spearheaded improvements in the Navy.

“So, he has not even texted me today. Meaning, there is no problem that he can’t handle,” Mr. Aquino said.

“So far, I haven’t seen anything that we should put extra attention to,” he said.

In its latest news briefing, the Philippine Atmospheric Geophysical and Astronomical Services Administration (Pagasa) said it may raise public storm warning signal No. 1 over the Bicol and Samar provinces on Thursday.

Chedeng was expected to enter the Philippine area of responsibility late Wednesday or early Thursday.

“We will suspend sea travel between Bicol and Samar once the storm warning signals are raised,” Pagasa meteorologist Jori Luiz said.

Pagasa said it would still allow land travel up to tomorrow afternoon. “By Friday night, we are no longer confident in allowing travel,” said Esperanza Cayanan, weather division chief at Pagasa.