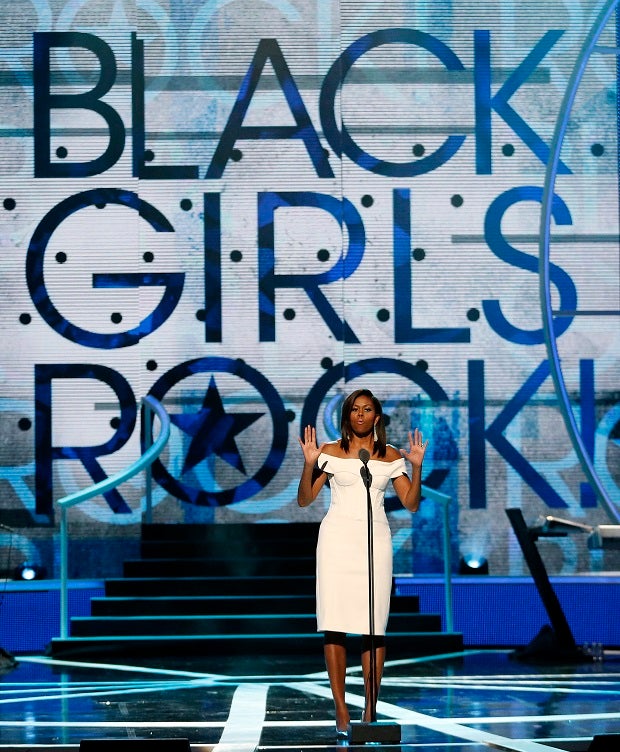 NEWARK, New Jersey, United States — First Lady Michelle Obama celebrated the beauty, power and tenacity of black women while spreading her own message of education for girls at Black Girls Rock!, an annual event honoring trailblazing women of color from all walks of life.

“No matter who you are, no matter where you come from, you are beautiful,” Obama told the crowd, which included many young black girls.

However, Obama was the most celebrated participant. Wearing a form-fitting white dress, she jammed to performances from the likes of Badu, Fantasia, Sheila E!, Estelle and others and applauded the honorees. 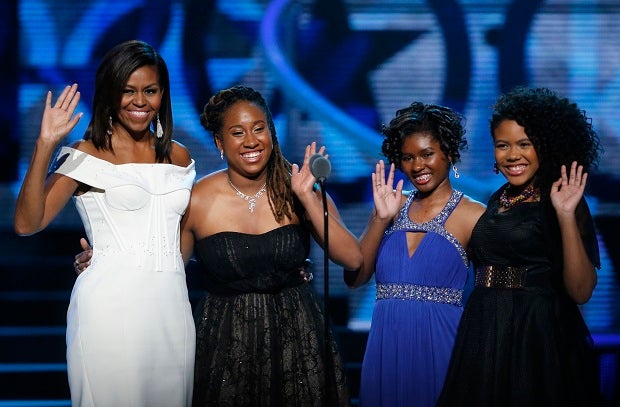 Obama got arguably the night’s loudest ovation as she came on stage and declared “Black girls rock!” — the slogan and name of the organization founded by Beverly Bond. It is designed to uplift young black girls, a group that often has difficulty finding positive and reaffirming images of themselves in the world.

Obama acknowledged as much in her speech to celebrate three young honorees.

“I know there are voices that you are not good enough,” she said, acknowledging that she often lacked self-confidence growing up despite encouraging parents.

“Each of those doubts was like a test,” she said, “that I either shrink away from or rise to meet. And I decided to rise.”

Obama, who recently completed a trip to Japan and Cambodia as part of her worldwide push for better educational opportunities for girls, lauded the young honorees for excelling in their studies.

“There is nothing more important than being serious about your education,” the Ivy League-educated Obama said. “That’s why I am able to stand here tonight. … I want every one of our black girls do to the same, and our black boys.” 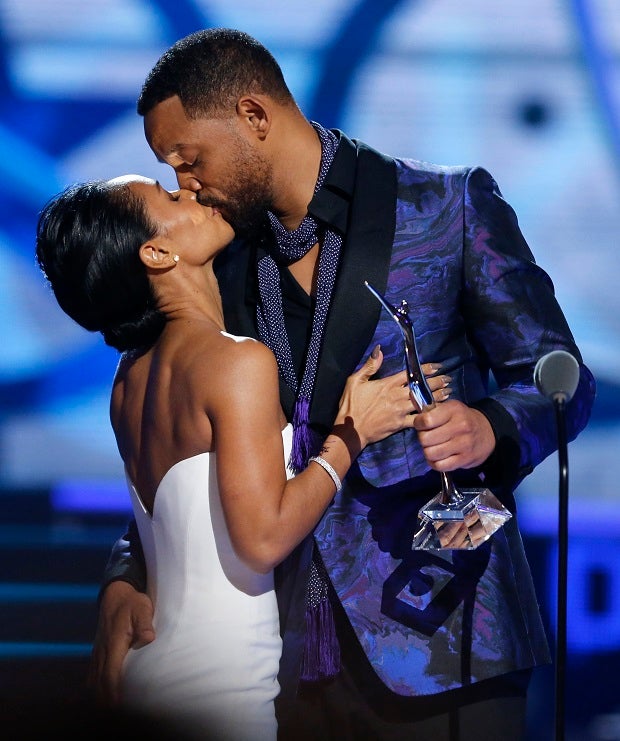 Actor Will Smith, right, gives a hug to his wife Jada Pinkett Smith before Will Smith gave Pinkett Smith the Star Power award during a taping of the Black Girls Rock award ceremony. AP

Obama’s speech was just one of many highlights of the nearly four-hour event, which will be shown Sunday, April 5, on BET.

Will Smith gave an emotional tribute to his wife, Jada Pinkett Smith, who received the Star Power award. Smith alluded to persistent rumors that the couple’s marriage was in trouble.

He said when one rumor got out of control, he had a chance for reflection.

“In that brief moment my heart jumped for a second and I started to imagine what my life would have been like without that woman,” he said as the couple’s daughter, Willow, beamed from the audience.

When Pinkett Smith accepted the honor, she alluded to recent slights of black girls and women — including a college baseball player’s slur against Little League pitcher Mo’ne Davis — as reasons why Black Girls Rock! is necessary.

Be aware of strength

She also implored black women to celebrate and be aware of their own strength.

“I need you to understand that we are the women who marched from cotton fields into fields of medicine … politics … entertainment,” she said. “We have found a way to march into the White House.”

Tyson also spoke to the resiliency of black women as she accepted her legacy award from hosts actresses Tracee Ellis Ross and Regina King.

“The moment anyone tries to demean or degrade you in any way, you have to know how great you are,” Tyson said. “Nobody would bother to beat you down if you were not a threat.” 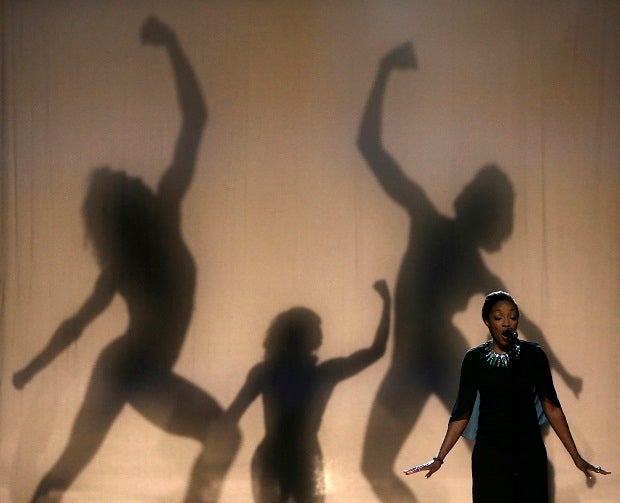 Musician Estelle, right, performs as dancers are silhouetted behind her during a taping of the Black Girls Rock award ceremony. AP

DuVernay, whose civil rights drama “Selma” received an Academy Award nomination, making her the first black woman to notch such an achievement, name-checked a host of other black filmmakers in her speech as she accepted her Shot Caller award, and implored women to “figure out what you need to do to be the heroine of your own story.”

The show peppered songs from entertainers like Jill Scott, Estelle and others with inspiring stories from the award winners. One of the members of the group Sister Sledge sang the song “We Are Family,” with the refrain “I’ve got all my sisters with me,” as the audience grooved along.

And sisterhood was the spirit of the evening, evident when Obama came on stage to close the show with all the honorees. When an embarrassed King flubbed a line, Obama gave her a hug and then jokingly rubbed her back.

The actress and director then shouted with glee, “I’ve got Mrs. Obama pumping me up!”

Michelle Obama dances with Big Bird on ‘Billy on the Street’

Read Next
Avoid TV, radio, cell phones, says Bicol bishop
EDITORS' PICK
In Borongan, nuns play hoops (not mahjong)
House energy committee chair Arroyo bats for cheap electricity
A laptop that maximizes your WiFi so you can maximize your productivity
Why Tagle is a leading papal contender
Powered by style, innovation and passion
KWF has no power to ban, censor written works – Lagman
MOST READ
Why Tagle is a leading papal contender
Arjo Atayde reveals proposal to Maine Mendoza was ‘more than a year’ in the making
My neighbor FVR: From soldier to president
Zubiri on SRA mess: Shameful, disgusting
Don't miss out on the latest news and information.