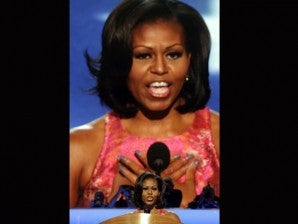 CHARLOTTE, North Carolina—Democrats beckoned Americans to return Barack Obama to the White House despite the agonizingly slow economic recovery as they opened their national convention, casting the president as someone who understands the struggles of ordinary Americans while depicting Republican rival Mitt Romney as privileged and out-of-touch.

The opening of the three-day convention on Tuesday was effectively a rebuttal to last week’s Republican convention in which Obama was depicted as driving down the US economy by favoring a welfare state over private enterprise.

The star speaker, Michelle Obama, played up her husband’s strong suits, declaring that after nearly four years as president, he is still the man who drove a rust-bucket car on early dates, rescued a coffee table from the trash, and knows the struggles of everyday Americans because he lived them in full.

“I have seen firsthand that being president doesn’t change who you are, it reveals who you are,” the first lady said to huge cheers Tuesday night in a deeply personal, yet unmistakably political testimonial highlighting the Democratic National Convention’s opening night.

Bill Clinton, the last president to preside over sustained economic growth and a balanced budget, gets the star turn Wednesday night in a speech placing Obama’s name into nomination—a high point in a checkered relationship between two men who sparred, sometimes sharply, in the 2008 primaries, when Clinton was supporting wife Hillary’s campaign for the Democratic nomination.

Romney, a businessman and former Massachusetts governor, appeared nowhere in Mrs. Obama’s remarks. But there was no mistaking the contrast she was drawing when she laid out certain values, “that how hard you work matters more than how much you make, that helping others means more than just getting ahead yourself.”

Such subtleties were otherwise missing from the stage as speaker after speaker blasted Romney and the Republicans. The party’s up-and-coming Julian Castro, mayor of San Antonio, Texas, captured the tone in branding Romney a millionaire “who doesn’t get it.” Former Ohio Governor Ted Strickland said, “If Mitt was Santa Claus, he’d fire the reindeer and outsource the elves.”

Delegates cheered as a parade of speakers extolled Obama’s support for abortion rights and gay marriage, for consumer protections enacted under his health care law and for the successful auto industry bailout he pushed through Congress in his first year in office.

Polling gives Obama a consistent advantage over Romney as the more empathetic and in-touch leader. But the sputtering economy is the topmost voter concern and Obama’s toughest mountain to climb after more than 42 months of unemployment surpassing 8 percent, the longest such stretch since the end of World War II. No president since the Great Depression has been re-elected with joblessness so high.

A new report found manufacturing activity declined for a third straight month. The Treasury Department announced Tuesday that the government’s debt passed $16 trillion. And the latest unemployment report, coming Friday, offers more potential fodder for Romney’s case against his rival’s stewardship unless it shows marked improvement. Romney took a few days off from the campaign trail, preparing in Vermont for three fall debates with Obama that could prove pivotal in this close election.

Mrs. Obama described a marriage of kindred spirits, built from humble roots, and said the president’s work on health care, college loans and more all come from that experience. “These issues aren’t political” for him, she said. “They’re personal.”

The first lady took the stage as the most popular figure in this year’s presidential campaign. Michelle Obama earns higher favorability ratings than her husband, Romney, his wife, Ann, or either candidate for the vice presidency, according to the latest Associated Press-GfK poll. And views of Mrs. Obama tilt favorably among independents and women, two focal points in her husband’s campaign for re-election.

Democrats looked to use the convention and its national television coverage to help Obama recapture the hearts of Americans once drawn to his message of hope and change, but now weary after years of economic weakness and political squabbles.

Castro’s selection to deliver the prestigious keynote address during prime viewing time was a sign of his rising stardom in the party and the increasing importance of the Hispanic vote, which Democrats are relying on to win several battleground states in the West.

After highlighting the humble roots of his Mexican-born grandmother, Castro ridiculed the advice Romney gave at a campaign event that students could borrow money from their parents to start businesses.

“Gee, why didn’t I think of that?” Castro said. “Some people are lucky enough to borrow money from their parents, but that shouldn’t determine whether you can pursue your dreams.”

The president closed a pre-convention tour of battleground states in Norfolk, Virginia, summoning a crowd at Norfolk State University to resist apathy and make sure to vote.

Republicans are “counting on you, maybe not to vote for Romney, but they’re counting on you to feel discouraged,” he said. “And they figure if you don’t vote, then big oil will write our energy future, and insurance companies will write our health care plans, and politicians will dictate what a woman can or can’t do when it comes to her own health.”

Obama later returned to the White House to watch his wife’s speech with their two daughters, two nights before his own convention-closing speech in the 74,000-seat Bank of America football stadium.

That speech will seek to re-create some of the grandeur of Obama’s acceptance address in a Colorado stadium four years ago. At the time, the United States was in the midst of a devastating financial crisis while unpopular wars were dragging on in Iraq and Afghanistan.  Obama—young, magnetic and eloquent—captured the imagination of many Americans as the first black nominee of a major party. He promised a fresh start after eight years of George W. Bush’s presidency and new hope for the economy.

Obama did withdraw US combat troops from Iraq and the United States emerged from the recession. But economic growth has been tepid. Though he stepped up drone strikes on suspected terrorists and gave the order that led to the killing of Osama bin Laden, Republicans cast him as a weak leader. He won congressional approval of an overhaul of the US health care system, but his plan remains largely unpopular.

The two conventions highlight the contrasting visions of government that voters will face in the November 6 election.  Romney’s Republicans, increasingly guided by the anti-tax tea party movement, want to minimize the role of government, which it sees as an obstacle to enterprise and liberty. Obama’s Democrats see government as a potential force for good, helping the downtrodden and providing the education and infrastructure needed to help the country prosper.

Candidates traditionally get a bounce in the polls from political conventions, though there is little sign that Romney improved his standing after the Republican convention in Tampa, Florida. Once dramatic events for selecting candidates and debating issues, political conventions are now carefully scripted shows put on by the parties, making them less compelling television programming.—Associated Press writers Julie Pace, Ken Thomas, Matt Michaels and Jim Kuhnhenn in Charlotte; Calvin Woodward, Jennifer Agiesta and Jack Gillum in Washington, Matthew Daly in Norfolk, Virginia;  Steve Peoples in Ohio, Kasie Hunt in Vermont, and Thomas Beaumont in Des Moines, Iowa, contributed to this report.